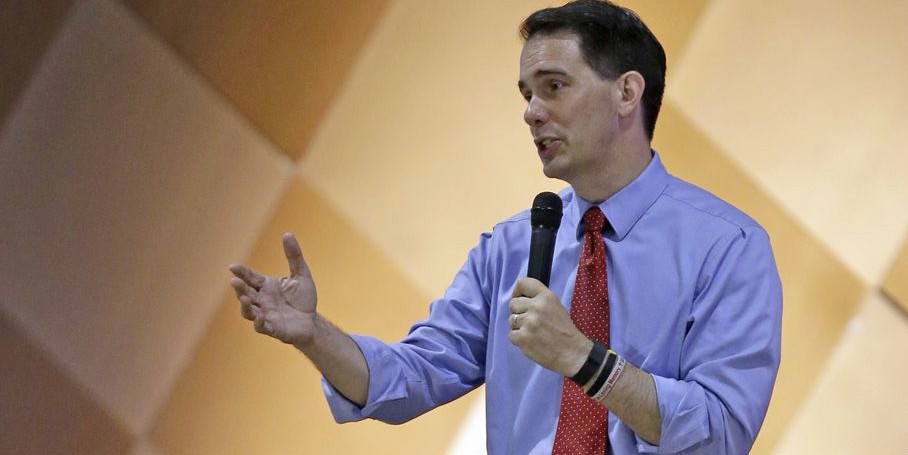 WASHINGTON ? The Republican candidates for president eagerly diagnosed Monday’s widespread stock sell-off, with President Barack Obama and China the most popular targets for blame on a day the Dow Jones industrial average fell by nearly 600 points.

Among them was Wisconsin Gov. Scott Walker, who blamed the tumble on what he called China’s manipulation of its economy. He called on Obama to grow some “backbone” and call off a planned state visit next month by Chinese President Xi Jinping.

Front-runner Donald Trump, appearing Monday on Fox News’ “The O’Reilly Factor,” agreed. “I would not be throwing (Xi) a dinner. I would get him a McDonald’s hamburger and say we’ve got to get down to work.”

Part of a global wave of selling triggered by a slowdown in China, the falling stock prices reflected greater uncertainty about economic growth worldwide and corporate profits for multinational firms.

The market turmoil is, in large part, a result of a crisis of confidence in China’s economy, the world’s largest. A heightened concern about a China slowdown shook markets around the world last week, and the dive continued Monday as China’s main stock index sank 8.5 percent.

China’s troubles raise doubts about whether its policymakers have the tools to keep their economy growing at a healthy pace, something that’s been a reassuring constant for more than two decades.

Beijing had cushioned its economy during the 2008-09 financial crisis by ordering state-owned banks to ply companies with loans to build roads, houses and factories. The result was an escalation of corporate debt that’s now feeding the country’s problems.

U.S. stocks have been primed for a sell-off for several months, many analysts said. Still, Monday’s action triggered worries about the vulnerabilities to U.S. workers and retirees from slowing growth in China, a major holder of government debt and exporter of clothing, electronics and other products.

They’re circumstances on which the Republican presidential candidates pounced. Here’s a look at what some had to say throughout the day.

“Americans are struggling to cope with the fall in today’s markets driven in part by China’s slowing economy and the fact that they actively manipulate their economy. Rather than honoring Chinese President Xi Jinping with an official state visit next month, President Obama should focus on holding China accountable over its increasing attempts to undermine U.S. interests. … President Obama needs to cancel the state visit. There’s serious work to be done rather than pomp and circumstance. We need to see some backbone from President Obamaon U.S.-China relations.”

Asked later how a Walker administration would resolve disagreements with the Chinese government without face-to-face meetings, he offered no specifics. “You have to start dealing with your staff and calling that out and send a strong message to China that there is different leadership,” Walker said.

“You don’t build a strong economy by empowering Washington-Wall Street elites at the expense of American workers on Main Street. Sadly, the chickens are now coming home to roost for the Obama administration and its failed economic policies. It’s time to build America’s economy, not China’s or Mexico’s, & quit importing cheap labor & exporting jobs overseas.”

“It’s also true that the Chinese government cut this deal with the Chinese people which is, ‘We’re going to keep this economy growing fast enough to lift millions out of poverty and in return, you’re going to accept censorship, repression and terrible safety standards and pollution. Frankly, I think now is the time for us to put pressure on China.”

“I’ve been saying for a long time … that we’re tying ourselves so closely to Asia and in particular to China that this is going to be trouble for our country. Not only now have they taken our jobs, they’ve taken our base, they’ve taken our manufacturing, but now they are pulling us down with them and I said we can’t do this, we can’t allow this to happen. We have to do a big uncoupling pretty soon before it’s too late.”

“This is a history of failed policies by this president. What’s happened is, because this president has run up more debt than any president in American history, that debt has been given to us in large measure by the Chinese. And so now, as the Chinese markets tend to have a correction, which they’re doing right now, it’s going to have an even greater effect because this president doesn’t know how to say no to spending, doesn’t know how to say no to a bigger and more intrusive government.”