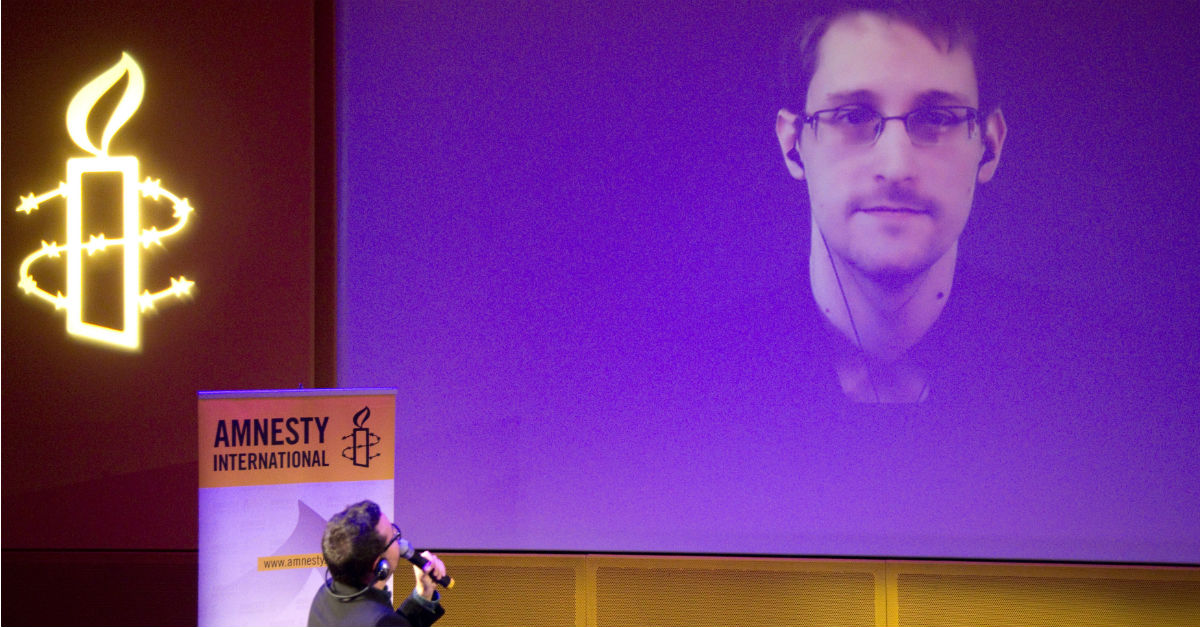 AP Photo/Charles Platiau, Pool, File
FILE - In this Dec. 10, 2014, file photo, former U.S. National Security Agency contractor Edward Snowden, who is in Moscow, is seen on a giant screen during a live video conference for an interview as part of Amnesty International's annual Write for Rights campaign at the Gaite Lyrique in Paris, France. Domestic digital spying on ordinary citizens is an international threat that will only be slowed with measures like a proposed international treaty declaring privacy a basic human right, Snowden said Thursday, Sept. 24, 2015, in a video appearance at a Manhattan forum. (AP Photo/Charles Platiau, Pool, File)

According to NBC News, a Justice Department source has revealed that Chelsea Manning is on President Obama’s shortlist for a possible commutation before he leaves office. A decision on the matter could come as early as Wednesday.

Manning, a transgender woman and former Army intelligence analyst who was then known as Bradley, was imprisoned in 2010 and given a 35-year sentence after turning over 700,000 documents containing classified information to Wikileaks — those documents included a video of a 2007 air strike in Baghdad in which the American helicopter crew could be heard laughing about the deaths they inflicted. Her lawyers maintained that she was a whistle-blower, but prosecutors branded her as a traitor. Although she has identified as a woman since the day after her hearing, she has been incarcerated in a men’s prison. While there, she has attempted to commit suicide more than once and went on a hunger strike while seeking gender reassignment surgery.

Manning’s sentence is believed to be excessive by many, including fellow whistle-blower Edward Snowden, who has been a strong advocate for freeing Manning. On Wednesday, Snowden publicly pleaded with President Obama over Twitter, asking him to grant Manning clemency.

“Mr. President, if you grant only one act of clemency as you exit the White House, please: free Chelsea Manning,” Snowden tweeted. “You alone can save her life.”

Mr. President, if you grant only one act of clemency as you exit the White House, please: free Chelsea Manning. You alone can save her life.

“I have more hope right now than I have the entire time since she was sentenced,” Manning’s aunt, Deborah Manning, told NBC News in regard to possible commutation. “I would say this is someone who’s never had a chance in life, who is extremely bright, who became extremely emotionally distressed as some point, who made a bad decision, who paid for that bad decision. And it’s time to let her go out and try to make a positive contribution in the world.”