No part of a Christian worship service, regardless of denomination, is more of a wildcard than the sermon. Is it going to be another snoozer about God from Father McNulty? Is Pastor John going to painfully try to connect with the teens at church, asking them to make Jesus “their boy” and “dab on the devil” by saying no to “doing weed”? Does something in the news have Rev. Smith all riled up with the Holy Spirit and ready hit the pulpit spitting straight fire (and brimstone)?

And how long is it going to last? Some priests and pastors were given the gift of brevity. Others are more, shall we say, theatrical. They treat the length of the sermon like Scorcese treats his films. “The longer it is the more great stuff I can put in it! What else do these people have to do on a Sunday morning anyway?”

Roman Catholics have always had a reputation in Christianity for long weddings, and historically black Protestant church services have been known to last for hours, with famously passionate and long sermons. But which denomination has, on average, the longest sermons? We now have some semblance of an answer on who takes the longest to interpret the Word of God on a weekly basis. The Pew Research Center conducted a study of nearly 50,000 sermons that were posted online or to social media by the churches they were given at and came away with the following results for the average sermon length.

The average length of sermons across all denominations was 37 minutes. Historically black, Protestant church sermons ranked the longest with 57 minute sermons. Catholic sermons, or homilies, meanwhile, were the shortest at a mere 14 minutes per mass. Evangelical church sermons were 39 minutes in length on average while mainline Protestant denominations, such as United Methodist or Lutherans, averaged slightly shorter sermons at about 25 minutes in length. Sermon length does not, however, have a direct correlation with service length, because the services themselves vary in a number of ways. 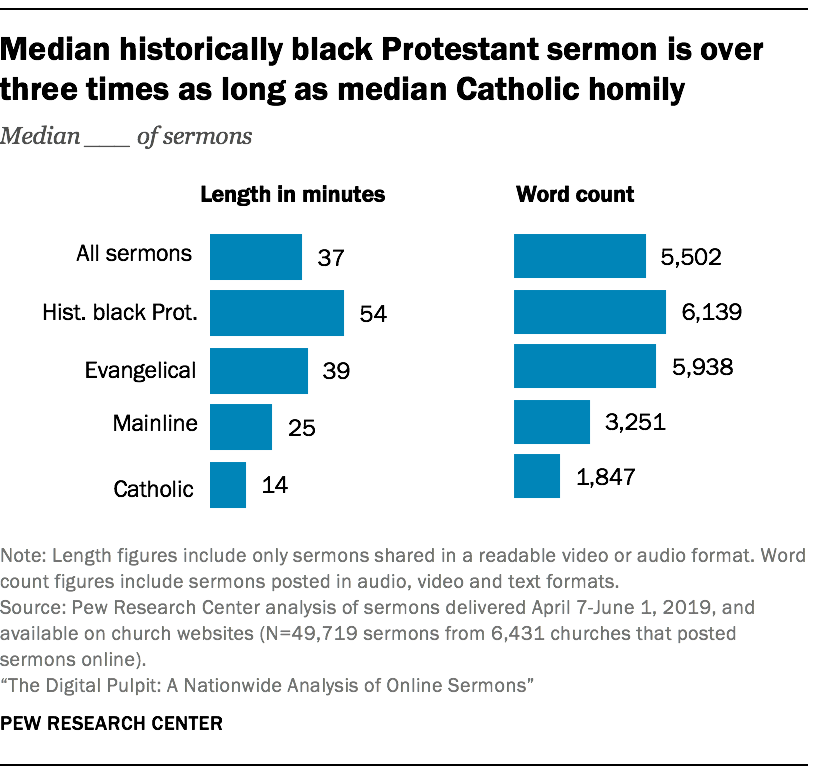 Whether you prefer longer sermons that really dive into God’s word or think a good sermon is a concise interpretation of scripture from the Bible for the church’s discipleship (and their annoyingly modern short attention span), it’s clear that there are no right or wrong answers about what makes the best sermon, but there are certainly a lot of different ones.

Watch: This American Pastor Found Out He Was an African Prince After a DNA Test