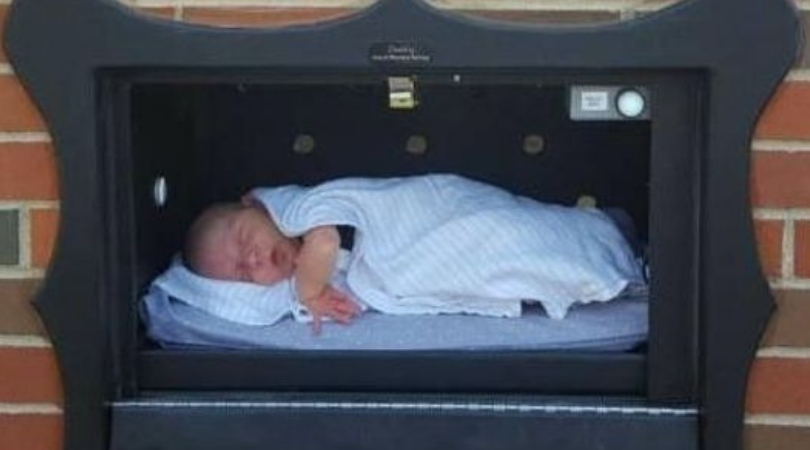 Have you ever heard of baby boxes? Yes, apparently that?s a thing. Under legislation approved by the state Senate, Michigan hospitals, police, and fire departments would be allowed to install ?baby boxes?, where parents could safely surrender a newborn.

The ?Newborn Safety Device? would lock from the outside after a newborn baby is placed inside, triggers a call to 911 within 30 seconds, and include visible instruction about its use. The Senate approved the main bill in a 30-8 vote after adopting an amendment to hold a manufacturer liable for any injury to a newborn, including death, resulting from the use of the device.

The legislation expands on a 2000 law allowing parents to anonymously surrender a newborn infant to the emergency services provided within 72 hours of birth, without fear of arrest or prosecution for abandonment. The child will be examined and given medical treatment if needed, and will later be placed in a foster or pre-adoptive home by child protective services.

In 16 states, surrendering parents are required to relinquish their infants only to a hospital, an emergency medical service provider, or health services facility. In 27 States, fire stations are also designated as safe have providers. Personnel at police stations or other law enforcement agencies can also accept infants under state law in 25 states.

In Michigan, more than 200 newborns have been safely surrendered through the state’s safe delivery program since 2001. The newborns were primarily surrendered at hospitals at the time of birth. The legislation would expand the time in which a mother could currently an infant to within 30 days of birth, requiring the Department of Health and Human Services to develop safety guidelines for the baby boxes. Pennsylvania, Indiana, and Ohio also have provisions for the devices, where early this year in a committee heron on the legislation, noted installation of the boxes would be optional.

The reason for the boxes? Experts believe the legislation takes the necessary steps to ensure no mother feels that she has to abandon her child illegally and leave it in a safe place. Monica Kelsey, founder of Safe Haven Baby Boxes, explained to lawmakers that the boxes the group installed in Indiana include a bassinet inside the box, cooling, and heating features, medical history of the mother.

Kelsey, who is a paramedic and firefighter, created the concept after she was abandoned as an infant. The boxes include two alarms that call 911 when it is opened and closed with a child inside. I don?t know how I feel about this one. Putting a baby in a box as an option doesn’t sound right to me. But hey, at least the child is safe, right?