Most Americans say it would be OK to use gene-editing technology to create babies protected against a variety of diseases — but a new poll shows they’d draw the line at changing DNA so children are born smarter, faster or taller.

A month after startling claims of the births of the world’s first gene-edited babies in China, the poll by The Associated Press-NORC Center for Public Affairs Research finds people are torn between the medical promise of a technology powerful enough to alter human heredity and concerns over whether it will be used ethically.

But like the majority of Americans, Keener would support gene editing in embryos to prevent incurable diseases. His mother has lupus, an inflammatory disease that may have both environmental and genetic triggers.

Lupus has been “a looming presence my entire life. I’ve been around somebody with a chronic illness and I’ve seen the toll that has taken, not just on her life, but the life of my family,” he said.

Gene editing is like a biological cut-and-paste program, letting scientists snip out a section of DNA to delete, replace or repair a gene. Altering adult cells would affect only the patient being treated.

But editing genes in eggs, sperm or embryos would alter the resulting child in ways that can be passed to future generations — a step with such profound implications that international science guidelines say it shouldn’t be tested in human pregnancies until more lab-based research determines it’s safe to try.

The AP-NORC poll shows about 7 in 10 Americans favor one day using gene-editing technology to prevent an incurable or fatal disease a child otherwise would inherit, such as cystic fibrosis or Huntington’s disease.

Roughly two-thirds of Americans also favor using gene editing to prevent a child from inheriting a non-fatal condition such as blindness, and even to reduce the risk of diseases that might develop later in life, such as cancers.

Side effects are possible, such as a gene-editing attempt that accidentally alters the wrong DNA spot, and the poll finds 85 percent think that risk is at least somewhat likely.

But about 7 in 10 Americans oppose using gene editing to alter capabilities such as intelligence or athletic talent, and to alter physical features such as eye color or height.

The poll highlights that if gene editing of embryos ever moves into fertility clinics, there will be some hard choices about what non-fatal disorders should qualify, said Columbia University bioethicist Dr. Robert Klitzman. What if scientists could pinpoint genes involved with depression or autism or obesity — would they be OK to edit? 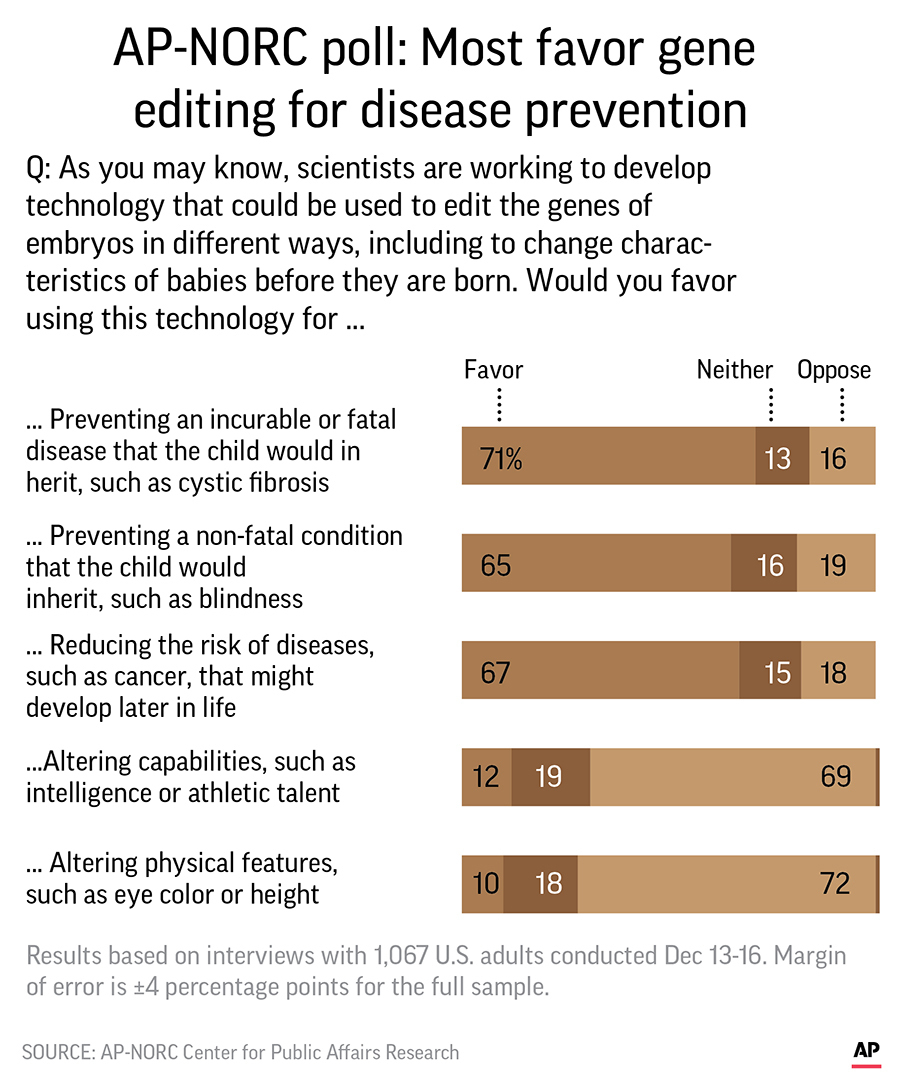 “It’s one thing to look at the extremes of fatal diseases versus cosmetic things, but in the middle are going to be these very different issues,” Klitzman said.

That reported gene editing in China was an attempt to create babies resistant to HIV infection, a target that many scientists in the U.S. and elsewhere decried because there are effective ways to prevent the AIDS virus.

The poll shows most people think it is at least somewhat likely that gene editing could wipe out certain inherited diseases and lead to other medical advances.

Yet despite the medical enthusiasm, more Americans oppose than favor government funding for testing on human embryos to develop gene-editing technology — 48 percent to 26 percent. About another quarter of the population takes no stand.

Without that research, how could gene editing ever become a choice for families hoping to avoid a disease?

“That’s a good question,” said Keener, the Pittsburgh museum worker, who opposes such funding for fear that research would lead to designer babies rather than fighting disease.

“If there would be a way to narrow the scope of research, I would be OK with government funding,” he said. “I just don’t have a lot of confidence people wouldn’t use it for their own gain.”

Indeed, the poll uncovers a lack of trust in science: About a third think this kind of gene editing will be used before it’s adequately tested, as many scientists say happened in China. Nearly 9 in 10 people think the technology will be used for unethical reasons, including 52 percent who say this is very likely to happen.

And roughly three-quarters of Americans say gene editing probably wouldn’t be affordable for the average person — raising the specter of certain genetic diseases becoming a problem only for the poor.

“People appear to realize there’s a major question of how we should oversee and monitor use of this technology if and when it becomes available,” said Columbia’s Klitzman. “What is safe enough? And who will determine that? The government? Or clinicians who say, ‘Look, we did it in Country X a few times and it seems to be effective.'”

The AP-NORC poll of 1,067 adults was conducted Dec. 13-16 using a sample drawn from NORC’s probability-based AmeriSpeak Panel, which is designed to be representative of the U.S. population. The margin of sampling error for all respondents is plus or minus 4.1 percentage points.

Watch: Alia the baby and Daisy the sloth are best friends