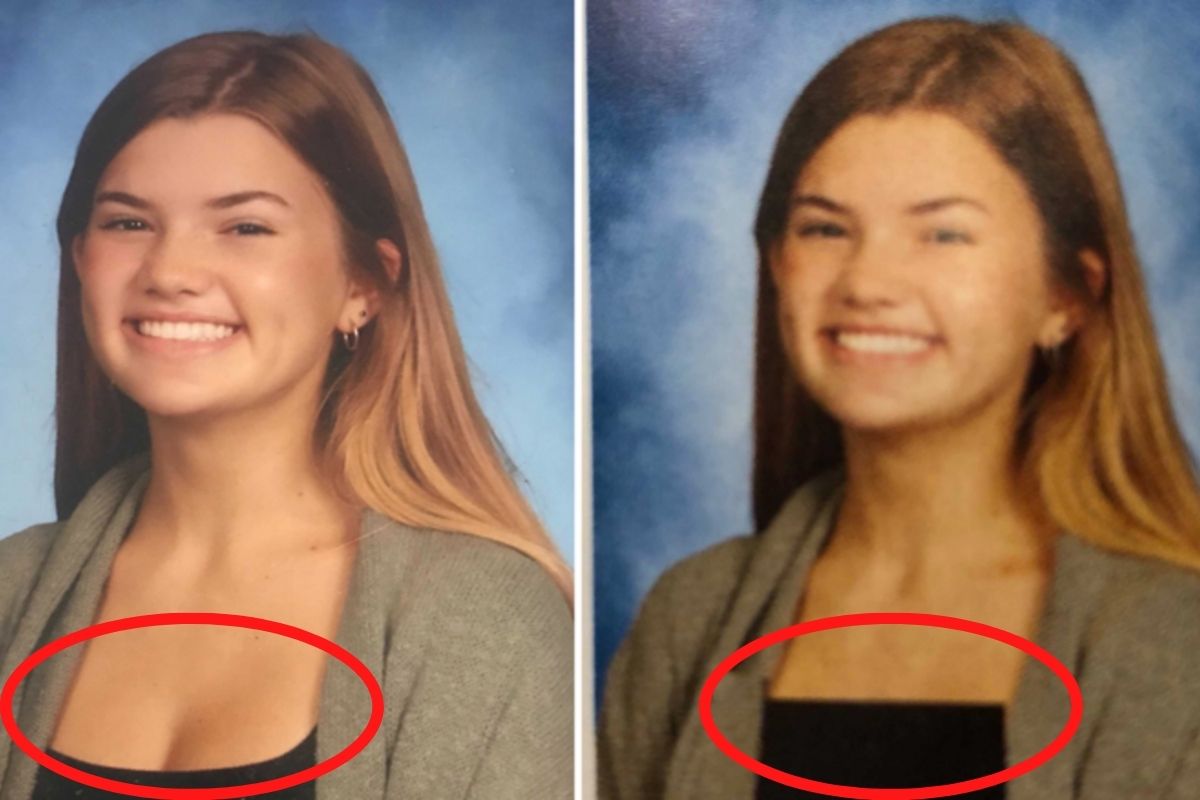 Via CNN
Via CNN

The end of the school year is always exciting: saying goodbye, making summer plans, and of course, getting a yearbook and tearing it open to see your photo. But what if… your boobs were purposefully cropped out of it? For many female students at one Florida high school, that’s exactly what happened. Bartram Trail High School edited 80 photos in their 2021 yearbook to remove any hint of cleavage.

Riley O’Keefe was finishing up 9th grade at Bartram Trail High School near St. Augustine, Florida when she noticed her yearbook photo featured a black bar over the top her breasts. She told CNN, “I couldn’t believe that they printed the yearbook looking like that. And then I started to flip through the yearbook and saw more and more girls with their chest edited.”

Although the high school warned online that any clothes not adhering to the student code of conduct would be “digitally altered,” O’Keefe’s picture day outfit was hardly immodest: a black tee under a grey cardigan. It’s hard to believe that would violate the district’s dress code, which states that girls’ shirts “must cover the entire shoulder and they must be modest and not revealing or distracting.”

According to the yearbook coordinator, however, 80 female students required that awkward modification. 80! That’s how many girls were disappointed to find their chest blocked out in the school yearbook. Check out below one plaid instance of that primitive photoshop, er, “digital alteration.”

St. Johns County School District Superintendent Tim Forson told CNN in a statement: “It is disappointing to be addressing the student picture situation in the Bartram Trail High School Yearbook. Certainly, there has never been an intent to embarrass or shame any student for the clothes that they wear. Unfortunately, we are learning a valuable lesson in the importance of process and understanding that the intent is not always the result.” He admitted that the review of the student wardrobe had been “insufficient.”

Riley O’Keefe’s mother Stephanie Fabre is also speaking out, saying that the yearbook edits are indicative of a larger issue: a sexist dress code followed with unfair enforcement. “It comes on the heels of a much bigger issue of gender discrimination and these girls being targeted and sexualized for being told that their clothes are wrong. There’s inequality within their dress code,” she said. Frankly, it’s outdated. One aspect of the official dress code even prohibits students from wearing culottes. Culottes!

Obviously, male students at BTHS will never be subject to dress code violations to the extent of their female peers. And is that really fair? I think Fabre speaks for most modern people when she stated, simply, “I mean, it’s 2021.” Not to mention, they are living in Florida where it’s hot all the time. Already two years, ago an online petition formed in the BTHS community advocating for students’ rights to wear running shorts and tank tops to school. That’s what my classmates wore all the time at my own public high school — in Chicago. Get with it, Florida!

As this story gains traction — it’s even been reported in The New York Times — there’s no doubt school administrators will need to respond. With action, rather than apologies. The school board chair has already acknowledged that a committee should be created to review the entire dress code.