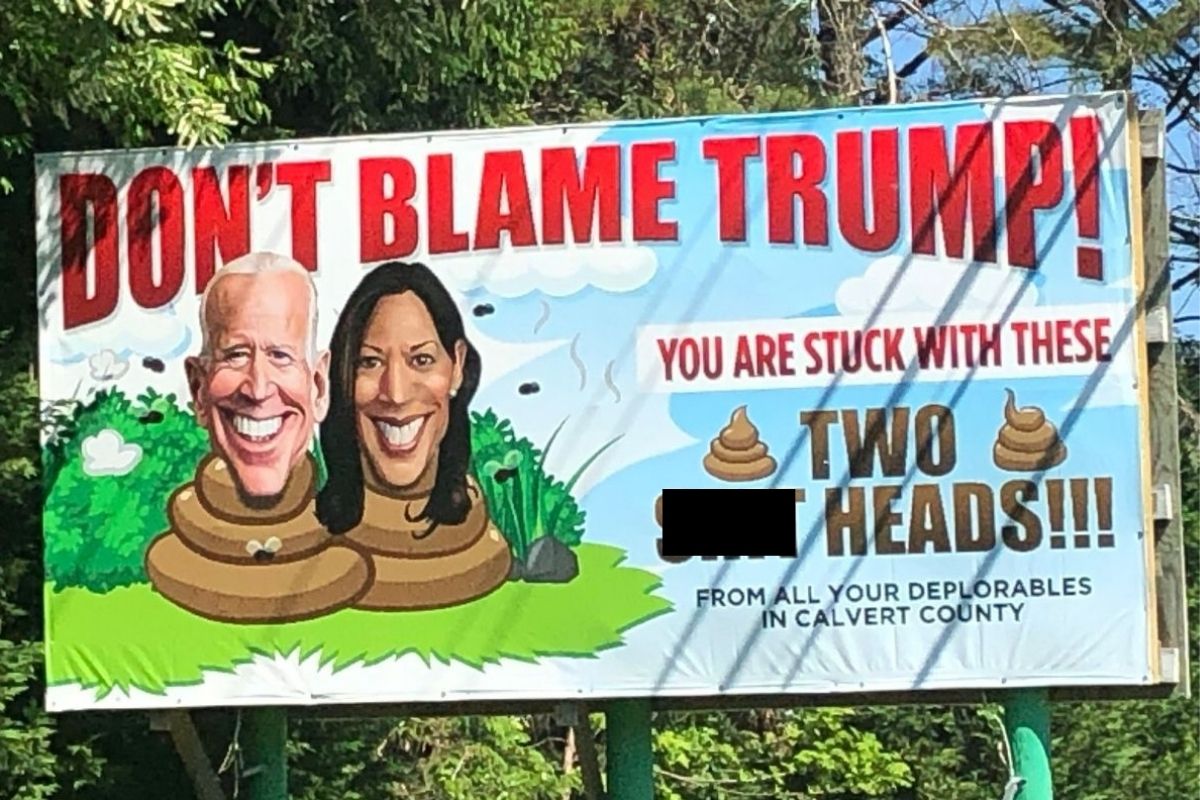 A vulgar Calvert County billboard in Maryland is now causing a stir on social media after it called President Joe Biden and Vice President Kamala Harris ‘sh**heads.” The sign is located on Route 4 in Huntingtown, showing the cartoon faces of both of them smiling on top of a large emoji-style drawing of poop. It reads, “DON’T BLAME TRUMP! YOU ARE STUCK WITH THESE TWO S–T HEADS!!!”

Jeanette Flaim, who is the chair of the Calvert County Democratic Central Committee stated the controversial billboard “is vulgar and it doesn’t reflect Calvert County.” She stated, “kids are going to school, and they’re going by it every day, and parents are driving their kids. We just don’t think kids should have to see that or parents should have to explain that.”

Despite the comments, Board of County commissioners President Buddy Hance indicated that taking the sign down may not be easy. He noted, “There is nothing that we as county government can do for language that’s on a legal sign. You know this country was built on the foundation of free speech, and sometimes we like what that free speech says and sometimes we don’t.”

Flaim stated that it’s just not an issue of free speech after numerous signs blasting Biden and supporting former president Donald Trump have gone up in the same place without any repercussions. What she particularly takes issue with is the insulting language and the mocking imagery that was used on this particular billboard. She stated, “We have not complained about any other signs. It’s this sign we think is, again, damaging to all of us, all of us in Calvert. The GOP, the Independents, everybody.”

The sign, which is on private property and is a standard size, doesn’t appear to break any local laws but has sparked mass outrage, especially among local Democrats. A statement from the Calvert County Government on their Facebook page stated that they;

Still, Flaim stated that the sign doesn’t reflect the values of the United States or Americans, regardless of what party anyone is. She stated, “our county welcomes visitors from far and wide”. She added that the billboard “certainly shouldn’t be what our visitors remember us for”. The group or the person behind the full board has not yet been identified. This isn’t the first time a billboard of this matter goes viral. Another billboard in the same location also went viral back in 2018. That billboard read, “Hey liberals, better get your guns if you try to impeach President Trump.” The sign indicated that it was put up by a Republican group that referred to themselves as “deplorables.”