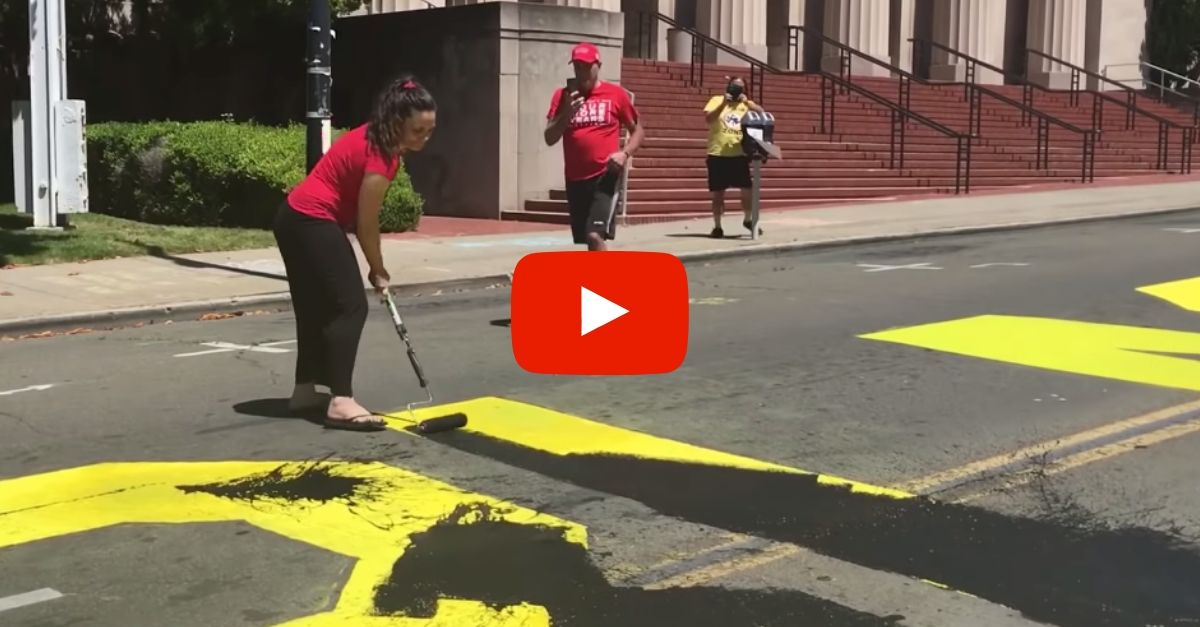 This article was originally published on July 7, 2020. It was updated on July 8, 20202 after authorities announced two individuals are facing a hate crime charge.

A white woman and a white man who allegedly painted over California community’s Black Lives Matter mural are now facing a hate crime charge, according to the Contra Costa County District Attorney?s Office. Nicole Anderson and David Nelson are each charged with three misdemeanor counts, including violation of civil rights, possession of tools to commit vandalism or graffiti, and vandalism. The incident occurred soon after the mural was painted in front of the courthouse in Martinez, California.

District Attorney Diana Becton released a statement, noting, “We must address the root and byproduct of systemic racism in our country. The Black Lives Matter movement is an important civil rights cause that deserves all of our attention.? She also stated the mural was a peaceful and powerful way to communicate the importance of Black lives in the country. The murals help continue discussions by listening to one another in an effort to heal our country and the community. The city quickly repainted the mural after the incident.

Both Nelson Anderson will be sent notice to appear in court, but the date has not yet been released. If convicted of the misdemeanor charges, each could face up to a year in County Jail.

A White man and a White woman who allegedly painted over a California community's Black Lives Matter mural this weekend are each facing a hate crime charge, the Contra Costa County District Attorney's Office says https://t.co/c7AXPLrNLx

Police in California are looking for a woman and a man who vandalized a Black Lives Matter mural on the Fourth of July. According to the Martinez Police Department, community members had obtained a city permit to paint the mural in downtown Martinez, located in the East Bay of the San Francisco Bay Area. Just after the words were painted with bright yellow paint, a white man and his wife showed up with cans of paint.

The woman quickly began painting over the mural in black paint, which let’s face it, is stupid. This woman began outlining the letters, meaning the words were still going to be on the street, they were just going to be black instead of yellow. Still, the obnoxious man spoke with a crowd of onlookers, yelling his lungs out. Authorities are now asking the public for their help in identifying the couple so they can be “held accountable for their actions.”

Police, and several Twitter users, shared the video on social media from the scene showing the woman using a roller to paint over the mural, while the man repeatedly stated, “We’re sick of this narrative.” By the time police arrived, the two were gone from the scene. Luckily, the onlookers were smart and decided to record the couple and their vehicle, capturing their license plate.

Witnesses also provide police with a photo of the car, which was a Nissan pickup truck “with the word “NICOLE” on the right side of the tailgate in silver lettering.” The video also shows that while the woman was painting the letters, the man called racism “a leftist lie.” The woman kept swearing her lungs out on onlookers, saying “This is not happening in my town.” That’s when she asks the man to get her another can of paint, calling the mural “vandalism.”

The fact that she is doing the painting while he is running his mouth…typical racist/sexist ish! pic.twitter.com/n33C4IgORa

The man, who was wearing a “Trump Four More Years,” walked back and forward saying, “Keep America great again” and told onlookers to “learn about history.” The police department called the vandalism “divisive and hurtful.” Through a statement, the Martinez Police Department added, “The community spent a considerable amount of time putting the mural together only to have it painted over in a hateful and senseless manner. Please help us identify those that are responsible for this crime, so they can be held accountable for their actions.” Black Lives Matter murals have been painted nationwide during the weeks of several peaceful protests against police brutality following the death of George Floyd.