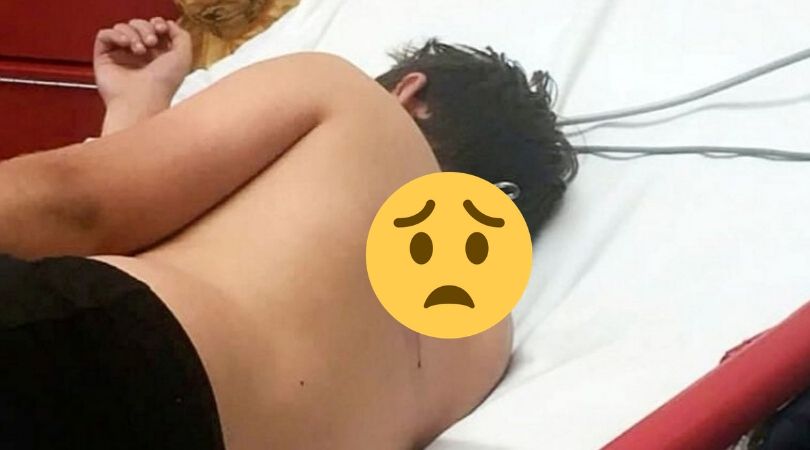 Ouch, talk about a freak accident! A freak trampoline accident, to be more specific. A 12-year-old boy was rushed to the hospital after a metal coil from a trampoline spring dislodged and shot into his back. Tell me about a graphic image to picture. The coil ripped through Jamie Quinlan’s T-shirt and struck him just a few centimeters away from his spine. He was immediately taken to Sheffield Children’s Hospital in Lincolnshire where he underwent emergency surgery to remove the coil.

Hanging out at his friend’s house, the boy stated he was mid-jump in the air on his friend’s trampoline when he heard something pop, and the 15 centimeter metal coil snapped off the bouncer and catapulted into his back. After the spring shot through the youngster’s back, the boy said he felt a “strange and heavy” sensation, and collapsed to the floor due to the intense shock. Luckily, the boy remained conscious while he was being transported to the hospital and in the waiting room.

According to his father, Ian Quinlan, the spring came off the trampoline like a bullet and was most likely traveling at an estimated 70mph. The metal spring remained embedded in the boy’s body until specialist doctors could physically remove it by surgery creating a six inch deep hole in his skin.

Boy, 12, impaled by trampoline spring 'lucky to be alive' https://t.co/e6ax7pUYyQ

Ian stated, “It could have happened to anyone. Jamie has been so brave. I want people to be aware of how dangerous trampolines can be if there’s no cover on the springs, or if there’s a gap. If it had hit elsewhere on Jamie’s body, in his head or throat, we could have lost him.”

The U.S. Consumer Product Safety Commission states that there are thousands of trampoline-related injuries each year. In 2012 there were 94,000 emergency room treated trampoline injuries. Children under six are the ones who are more at risk. The American Academy of Pediatrics noted several broken bones, sprains and strains, concussions and neck injuries are the most common. Safety experts recommend using safety nets and pads to cover the trampoline frame, springs and surrounding land surfaces with protective pads to try and prevent more terrible things happening from freak trampoline accidents.

Maybe we need to be more careful about what goes on in our own back gardens.

Editor’s note: This article was originally published on September 5, 2019.

Next: Heartwarming Viral Video Shows 4-Year-Old In Wheelchair Bouncing on a Trampoline