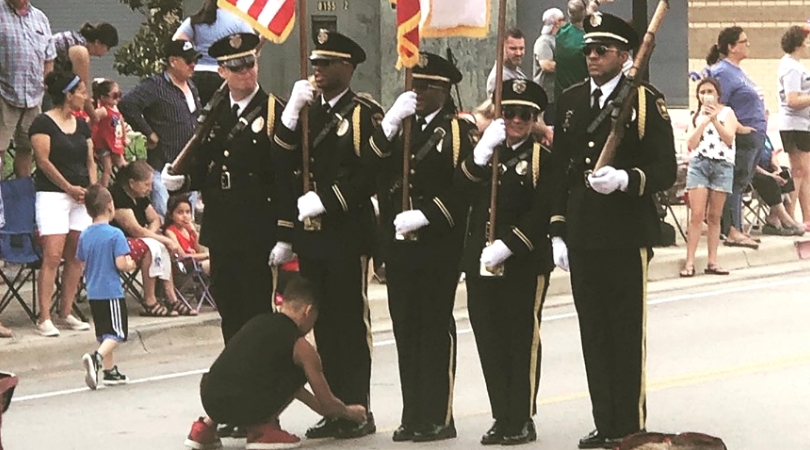 Be still my heart. This is the cutest thing I have seen in a while. This little boy knew that it wasn’t the best look for a member of an Honor Guard to have untied shoes, so he decided to help him out. What did he do? He physically ran up to him and kneeled down in front of the Honor Guard to tie his shoelaces!

Wendy Collins Smith took a picture of the sweet moment and posted it on Facebook, showing the 10-year-old, only identified as Josh from Texas, hopping into a Fourth of July parade without hesitation. This young man won the hearts of everyone on Independence Day, indeed.

The photo quickly went viral on social media, because let’s face it, it’s adorable. This kid was just trying to help any way he could and did it in the most innocent way knowing that the Guards’ hands were full as he presented the American flag. Arlington Police Chief Will Johnson tweeted out the photo saying they wanted to recognize the boy with a Chief Challenge coin for being kind to the Honor Guard member.

Several Twitter users also pointed out the sweet gesture, saying the Texas boy should be proud of himself for his dedication to his country. According to the Arlington Police Department, Josh is actually the grandson of Dennis Wiles, the pastor of First Baptist Church of Arlington.

At the start of the 4th of July Parade this young man ran out to help one of our Honor Guard members whose shoe came untied. Thank you Josh! We should all be so kind. I have a Chief Challenge coin for you. #America pic.twitter.com/lQr2rxVWQC

So, can it be that his respectful nature comes from his family? I sure hope so! His parents must surely be proud of him. Can you imagine what he’s going to be like when he’s 20? Let’s all be like Josh and help each other out, instead of fighting about nonsense all the time. A simple act of kindness can sure go a long way.