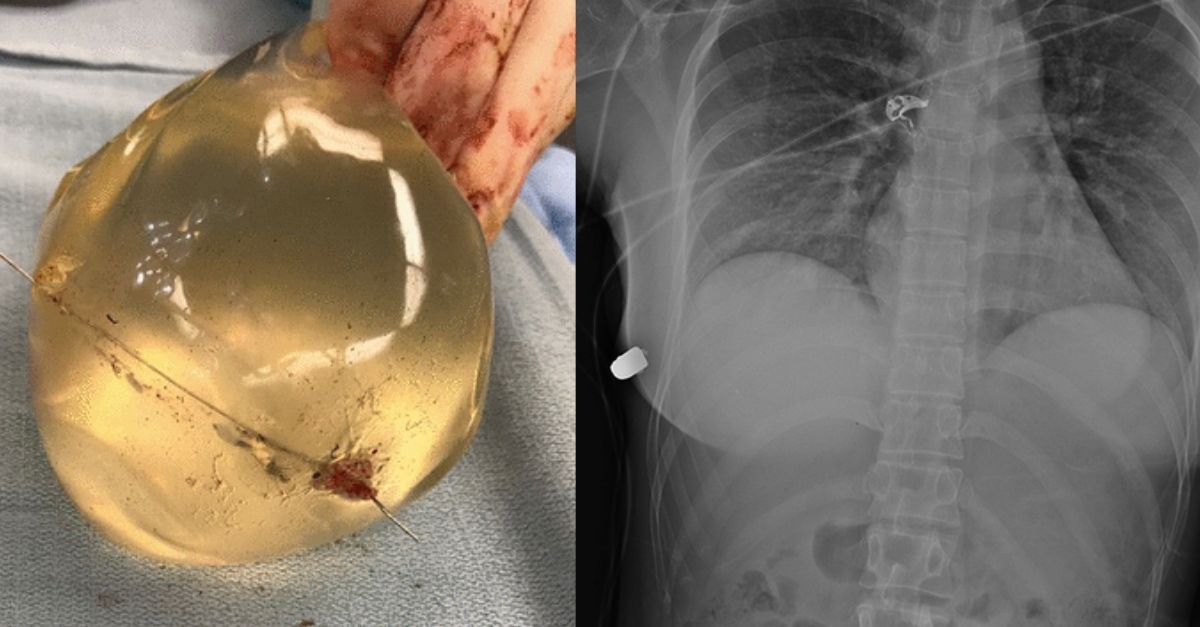 Talk about pure dumb luck! If you were looking for a sign to reassure why you should get breast implants, this is it. You can thank the universe. Kidding, only get breast implants if you want to, but I mean…you can’t make stories like this up.

Turns out a woman survived a close-range gunshot wound to the chest and was saved due to her silicone left breast implants. Yes, this woman’s life was saved thanks to boobs! According to doctors, who published the case on the SAGE medical journal, a silicone breast implant literally deflected a bullet away from the 30-year-old woman’s vital organs such as her heart and lungs.

The woman was shot back in 2018 in Toronto, Canada. When she arrived at the emergency room doctors noticed the silicone implant was likely responsible for deflecting the bullet’s trajectory which saved her life. According to surgeon Giancarlo McEvenue, the woman survived with just a few broken ribs on the opposite side of her chest where she had originally been shot.

Doctors quickly summarized that the trajectory of the 40-caliber bullet was changed by the implants. As far as who shot her, well the investigation is still ongoing and no firearm or suspect has been found. But, according to the study, the patient had apparently walked down the street and felt heat and a pinch to her chest. When she looked down she saw blood, which is when she went to her local emergency department.

McEvenue stated it was rare for a breast plant to actually save a life, and this was the first recorded instance of a silicone gel implant having that certain effect. So much so that this woman was able to walk herself to the hospital, and was talking as if nothing had happened. He stated, ?The trauma team was in disbelief at how well she was. The bullet wound entry was on the left breast, but the rib fracture was on the right side. The bullet entered the skin on the left side first, and then ricocheted across her sternum into the right breast and broke her rib on the right side. The left implant caused the change in the trajectory of the bullet.?

This news can only increase the breast implant market here in Chicago. https://t.co/j37nULXZxZ

According to CNN, the bullet was said to have been headed to her heart, but luckily the implant was there to stop it. Medics were able to find a hard bullet-like object in the woman’s right anterior thoracic wall below her right breast. Then, using trauma radiographs and CT scans, they were able to spot the bullet in the right lateral thoracic wall, her fractured rib, and several air bubbles in her left breast. So, ultimately, they concluded that indeed the bullet had traveled from the left breast to the right thoracic wall.

At the end of the day, this woman was probably grateful she had decided on getting that boob job after all. Quickly, plastic surgeons were able to treat her wounds, remove the implant, irrigating the wound, and then prescribed some antibiotics for the pain. As far as if she got new implants, well, that’s unknown. But, let’s face it, after this, I’m sure she will.