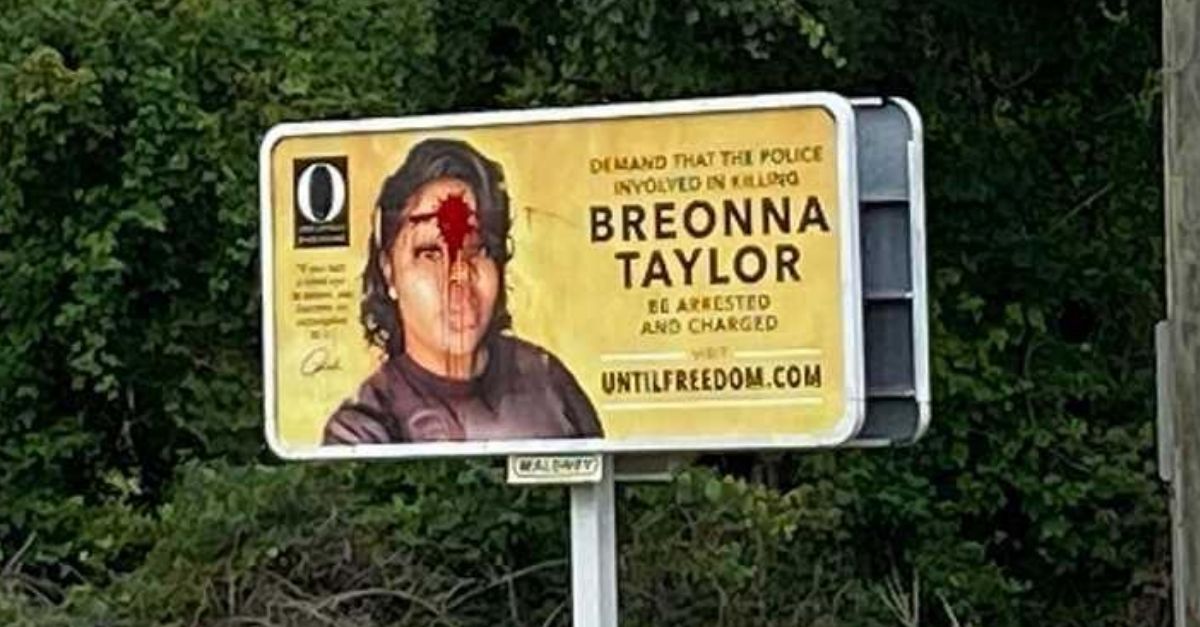 Via WLKY
Via WLKY

The billboard of Breonna Taylor in her hometown of Louisville Kentucky was vandalized. The billboard, which is part of a larger campaign that is demanding Justice for Taylor’s death, now features a very large splatter of paint on her head. Near the area of Lexington Road and Spring Street, it shows red paint splattered right in the center of Taylor’s forehead resembling a bullet wound. According to CBS Louisville affiliate WLKY-TV the billboard is among 26 that represent each year of Taylor’s life and was erected around the city by and sponsored by Oprah Winfrey’s magazine earlier this month. The image is the same one that was used on the September cover of O, The Oprah Magazine, which marks the first time in the publication history let someone other than Winfrey was featured on the cover.

All Billboards have the same clear call-to-action: “Demand that the police involved in killing Breonna Taylor be arrested and charged. Visit UntilFreedom.com.” There is also a quote by Winfrey herself, stating, ? if you turn a blind eye to the system, you become an accomplice to it.? The sign directs people to the social justice organization Until Freedom, which has now taken up residence In Louisville to focus on getting justice for Taylor. According to O Magazine, the online statement directs people to sign petitions that demand justice for Taylor, call Kentucky officials and donate to several local bail funds using #SayHerName on social media.

A spokesperson for the Louisville Metro Police Department spoke about the vandalism saying they “were made aware, via social media, of the damage” on the billboards. When officers went to check on the Breonna Taylor Billboard, there was no damage visible. As of this writing, no reports have been filed.” WLKY reported that the sign was later replaced or cleaned.

Taylor’s death was one of several this year, including that of George Floyd, which sparked a national drive to end excessive use of force by police officers. Taylor was killed on March 13th by police and her home with a no-knock warrant. Officers fatally shot Taylor, EMT worker, while looking for drugs that were never found. Only one of the three officers involved in the death, Brett Hankison, has been fired, and none have been charged. Taylor’s family did file a lawsuit against the officers back in May accusing them of wrongful death, gross negligence, and excessive force. In June, Mayor Greg Fischer signed the ?Breonna’s Law? which bands use of no-knock search warrants, and it requires officers to wear body cameras whenever they execute a search warrant.

The father of Michael Brown Jr., who’s also shot to death by police in Ferguson Missouri back in 2014, has called for justice in Taylor’s case and also traveled to Louisville recently to join the protest with until freedom. This week, former First Lady Michelle Obama referenced Taylor’s death while delivering a speech during the first night of the Democratic National Convention.

Obama stated, “Here at home, as George Floyd, Breonna Taylor and a never-ending list of innocent people of color continue to be murdered. Stating the simple fact that a Black life matters is still met with derision from the nation’s highest office. Sadly, this is the America that’s on display for the next generation.” Taylor’s death by Louisville police officers is currently under investigation by Kentucky attorney general Daniel Cameron.