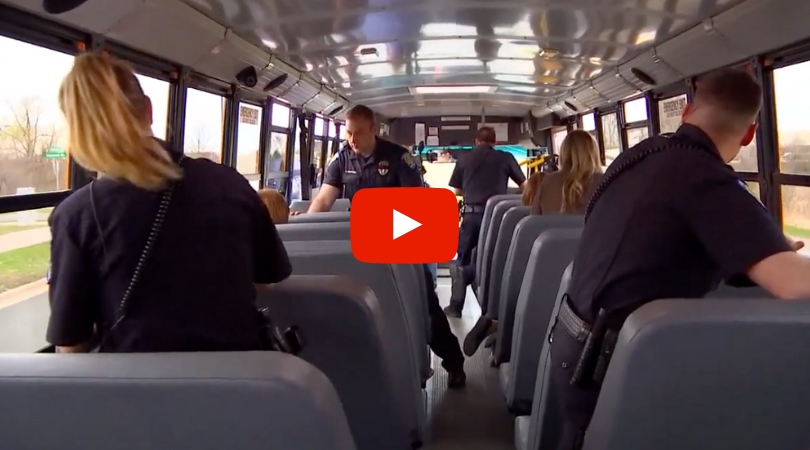 Well, it looks like police officers are getting more and more creative these days. Why? Well, officers in Minnesota are following Illinois’ State Troopers attempt to catch distracted drivers, who went undercover as construction workers. But this time around, officers in Eagan decided to take it one step further and use school bus! Which just makes it even more terrifying.

How exactly is the police department incorporating a school bus? Well, police officers will be riding the buses around the town to catch those breaking the law. Under the operation called, “Busted by the Bus”, they hope to reduce the number of people on their cell phone while close to school buses, to prevent accidents from happening.

Police say that when drivers go around the stop arm, it’s usually because they are looking down and are either texting or changing the music on their phone. According to Chris Meade, an Eagan Police officer, at one point of the day, a driver was clearly spotted using their cell phone to text. The driver was unaware that several offices and cameras were watching his “illegal activity” from the yellow school bus. Meade stated, “I looked into the vehicle and I could see the driver of a black Cadillac sedan. He had his phone in his right hand, kinda resting in the center of the steering wheel, kinda texting with one thumb, holding the steering wheel with his left hand.”

The ultimate goal of “Busted by the Bus” is to get drivers to be extra cautious around school buses, with or without kids inside. Officers want drivers to treat school buses with respect and react to them like they would a squad car. Basically, they want drivers to slow down and obey the law by not using their cell phone.

According to Eagan police, Independent School District 196 makes nearly 8,800 stops a day during the school year and sees nearly 8 to 18 violations in a “typical day.” “Busted by the Bus” is aiming to curb these driving behaviors. If a violation is observed, the officers inside the bus give the information to patrol cars around the area to “stop the violator.”

If you think about it, distracted driving is as dangerous as drunk driving. Our eyes are glued to the screen, which can cause us to swerve and hit something without us knowing. So, I get why officers are trying to stop drivers from using their phones near a bus. Think of the children.

Is it extreme? Well, yeah sure, maybe. But it can surely save some lives.