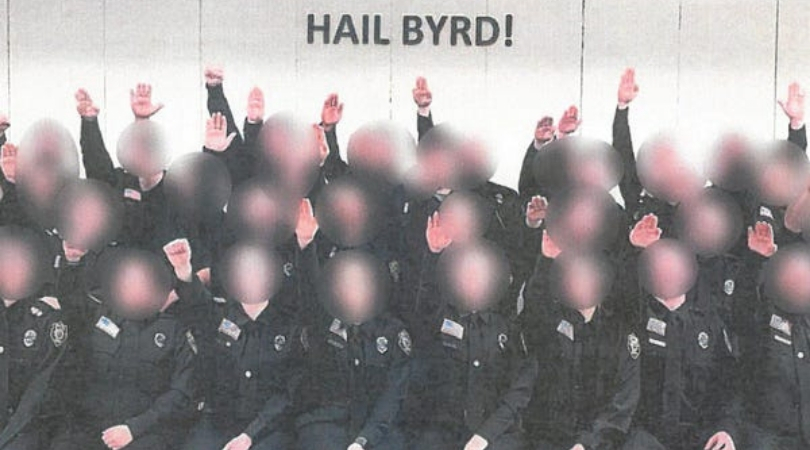 West Virginia governor Jim Justice approved the firing of all correctional officer cadets who decided to participate in a Nazi salute during a class picture. Justice also approved a firing of an academy staff member who failed to report the content of the picture.

Governor Justice called the incident “completely unacceptable.” The firing comes at the recommendation of West Virginia Military Affairs and the public safety secretary Jeff Sandy. In addition to all the firings, Sandy recommended four Academy Instructors be suspended without pay. Two Academy instructors and a Cadet were reportedly previously fired as a result of the incident.

The highly offensive photograph shows West Virginia Division of Corrections and Rehabilitation basic training class #18, which took place from October and November, give a straight-arm salute. The photo also has a line of text reading, “Hail Byrd,” which is a reference to an “Instructor Byrd.”

Today Republican WV Gov Jim Justice approved the firing of ALL 34 cadet prison guard trainees who were seen making a Nazi salute in a class photo that was made public, along w/3 staff members (1 an instructor)
Hate has NO place in OUR America!#OneVoice1 https://t.co/P0cvVffxsA

According to the investigation, “There is no dispute that the ‘Hail Byrd’ gesture and photograph were highly offensive and egregious in appearance, but the investigation did not reveal any overt motivation or intent that this was a discriminatory act towards any racial, religious or ethic group.” The Investigation also noted, “rather, contributing factors included poor judgment, peer pressure, ignorance, and fear of reprisal.”

The investigation included a total of 58 interviews and determined that the gesture and the “Hail Byrd” caption was done with instructor Karrie Byrd’s knowledge. According to multiple cadets, the photo was taken several times since not everyone agreed with the gesture in the first place. 10 of the cadets reported they did not make a gesture until Byrd instructed them to. The cadets stated they only did it at the time in fear they would not graduate for “disobeying the directions of an instructor.” The photo shows seven of the cadets holding up a closed fist.

The investigation also noticed that when confronted about the photo by a secretary who found it offensive, Bryd responded, “that’s why they do that because I’m a hard-ass like Hitler.” The investigation noted that an instructor reprimanded the class, but that Byrd told the group she saw “nothing wrong with the gesture and allowed it to continue.” Governor Justice defended the firing, stating their behavior is not tolerated “on his watch.”

“As I said from the beginning, I condemn the photo of Basic Training Class 18 in the strongest possible terms. I also said that this act needed to result in real consequences – terminations and dismissals. This kind of behavior will not be tolerated on my watch in any agency of State government. We have a lot of good people in our Department of Military Affairs and Public Safety. But this incident was completely unacceptable. Now, we must continue to move forward and work diligently to make sure nothing like this ever happens again.”