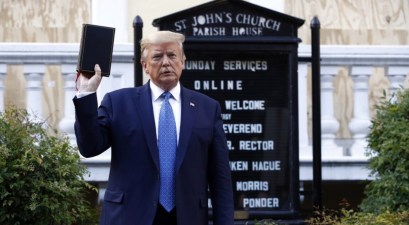 Jenner was asked almost immediately about the news of the week: the shooting at a congressional baseball practice that wounded members of Congress and Capitol Police officers.

RELATED: Caitlyn Jenner was spotted at the White House for a meeting

“Nobody deserves what happened out there, there’s no justification,” she said.”It’s happened then and it will happen again, unfortunately,” she added, blaming “crazy people.”

“Fortunately,” she added, “the guy was a really bad shot. Yeah, liberals can’t even shoot straight,” she said, mocking James Hodgkinson, the Bernie Sanders supporter and former campaign volunteer who opened fire on the baseball practice.

The crowd present, presumably College Republicans, erupted in applause and cheers, moments after the host had decried the “rhetoric” used around the shooting.

She went on to answer questions about being trans, being Republican, supporting President Donald Trump, whether she shops at Nordstrom and her work attempting to build bridges between transgender Americans and the Republican party.