Mom Warns Against “Call Santa” App After It Told Her, “I Will Kill You” 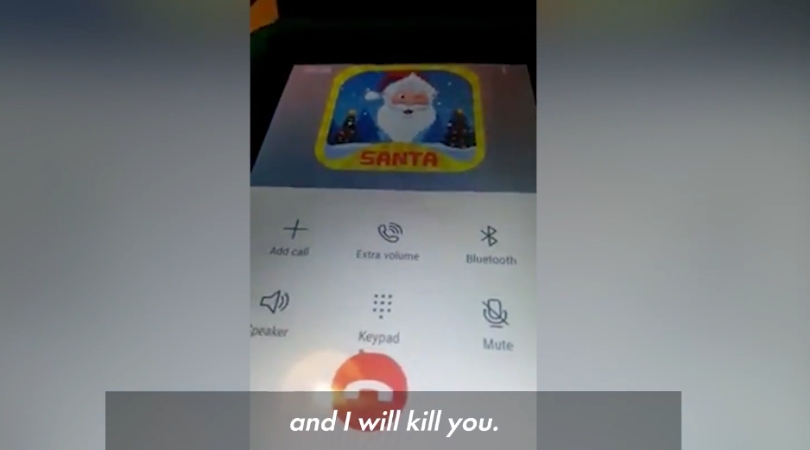 It looks like Santa might be taking the naughty list a little too far this year after an app reportedly repeated “Santa” was going to kill children. Yes, Kersty Elizabeth Taylor described how she was “left absolutely fuming” after hearing the disturbing message on her 3-year-old son’s Finlee’s Kindle. The toddler had downloaded the app from the Amazon Children’s Store.

The mom posted a video on her Facebook, showing how the app worked, titled “Santa Call New 2018”. When one pressed the call button, an incoming call from Santa pops up. Before one can say hello, an automatic voice comes on saying, “Hello there. Can you hear me, children? In five nights, if you’re free, I will look for you, I will find you, and I will kill you.”

The whole idea behind the app is that it allows children to “speak” with Santa himself, as he repeats the same cheerful messages to the children. But clearly, someone has tampered the app to deliver the chilling message instead. Several parents are outraged by the app, since many children might not know the danger behind it, and might end up traumatized.

The mother is urging other parents to exercise caution when using any app or allow their children to have access to download at their free will. She successfully reported the app and is urging parents to check their children’s phones and tablets to avoid potential scares like these. Unfortunately, although reported, the app won’t automatically uninstall from anyone who has downloaded it on the phone, but Amazon is reportedly investigating the incident and is contacting the app’s publisher to demand an explanation.

How that child isn’t scared for life is beyond me. I guess the creators were Liam Nelson fans?

Watch: These Stores Will Be Closed on Thanksgiving Day 2018