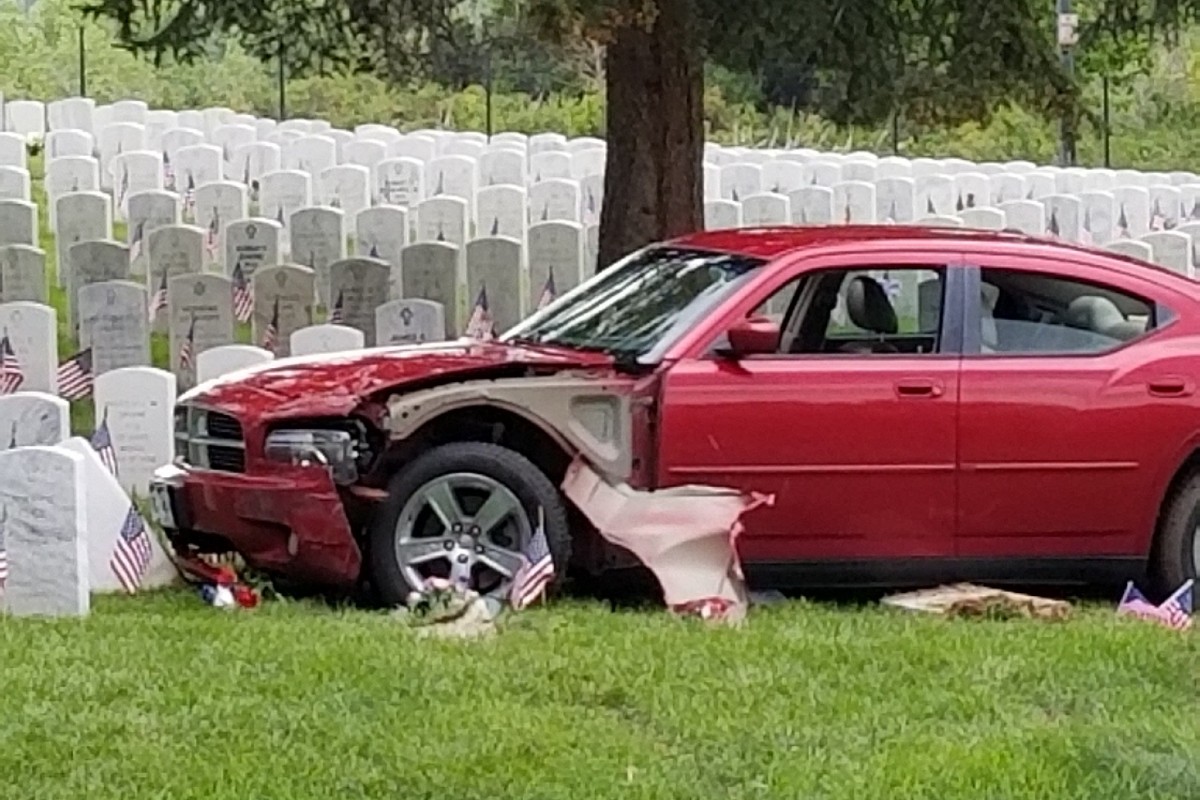 On a day honoring fallen war veterans by visiting military cemeteries or memorials, a woman reportedly swerved off the road and crashed into multiple headstones and parked cars at the Fort Logan National Cemetery in Denver.

What We Know About the Serious Crash on Veterans Day

The incident occurred on Memorial Day weekend on Monday, according to a report from the Denver Police department.  Officers were summoned to the veteran’s cemetery, where the driver allegedly sideswiped two parked vehicles before driving into the lawn, where she hit several veterans’ memorial gravestones. Some headstones were ripped out of the ground, while others were cracked in half, according to witnesses.  It is not yet known how many gravesites were damaged in the car crash, say police.

Speaking with local news outlet Denver7, witnesses reported a red car driving at full speed across the lawn, hitting two other cars, going through a ravine, and smashing into some gravesites. According to witness Antonio Moran, the driver was smiling and shouting at the crowd asking for empathy as she was escorted away by the police officers. “This day is supposed to be about honoring and giving respects and remembering the veterans that gave their lives for this country,” said Moran, “so the fact that someone made these kinds of choices and disrupted a cemetery out of all places, it’s sad.”

When the police arrived, the driver — whose identity has not been released — appeared to be intoxicated on alcohol or another substance. She is currently being investigated for driving under the influence (DUI).

According to officers, no life-threatening injuries were reported in the vehicle crash, despite there being many bystanders visiting the gravesite. According to police reports, the collision was a non-fatal crash.

Celebrating Veterans Day Amid a Pandemic

Fort Logan National Cemetery’s annual Memorial Day ceremonies were canceled due to the coronavirus pandemic, but many gathered to continue their own traditions.

CBSN Denver reported that nearly 2,300 visitors were out in the cemetery on Sunday to plant over 100,000 American flags. On Monday, a volunteer organization known as Victory for Veterans laid thousands of flowers at the graves.

President Joe Biden commemorated the day himself, urging Americans to honor the fallen by strengthening and protecting democracy. “Democracy itself is in peril, here at home and around the world,” he said. What we do now — what we do now, how we honor the memory of the fallen will determine whether or not democracy will long endure.”