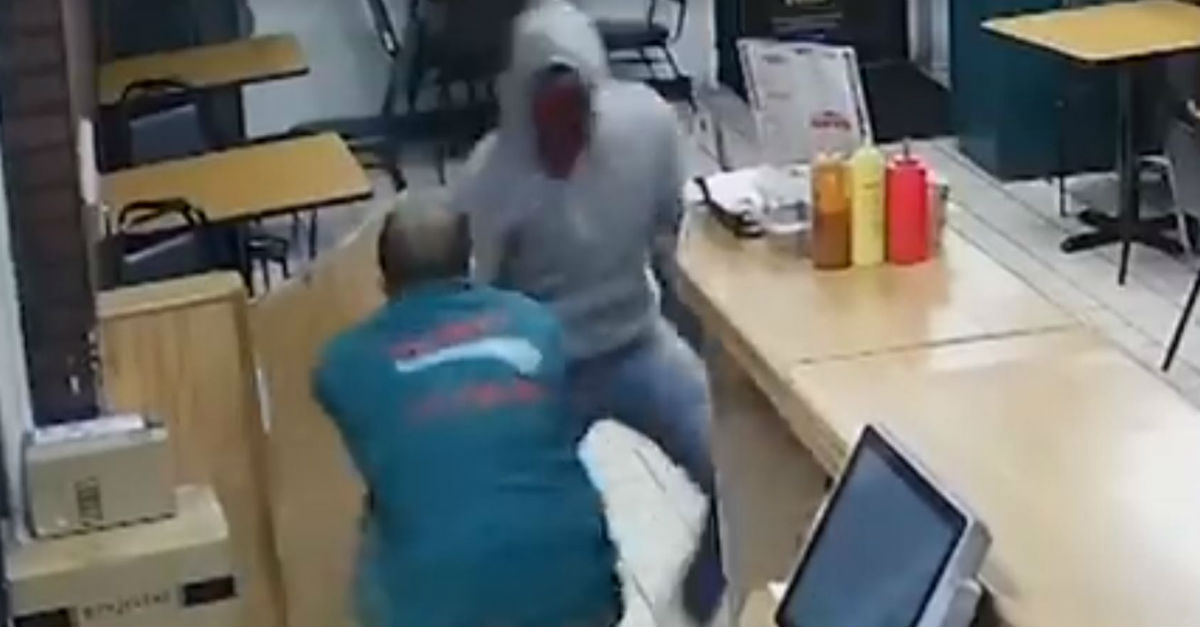 A Philadelphia, Pa., robber decided to hold up a pizza shop but met with some stiff opposition when owner Mohammad Remahi, 40, decided he wasn’t going to let his hard-earned money just disappear.

In a video of the incident, the burglar storms into the shop waving a gun and demanding money from the register. Remahi opens the till, but as the thief begins taking cash out, the owner grabs at his gun. Eventually, the suspect flees and even fires a shot at Remahi. The owner recalled to WCAU, “When he shot the gun, it just made me more angry. It’s like a rage. It’s like when you have an angry dog.”

Remahi said that he thought the gun was fake: “I was like, ‘That’s a toy; that’s not a real gun.’ And I’m trying to get it from him.” The robbery occurred at the end of his 12-hour shift, and he wasn’t willing to give up his cash without a fight.

The suspect and Remahi tussled across the restaurant for a few moments before the robber fled on foot. Though the criminal managed to make off with some of the money, the owner knows that he’s lucky; he told WCAU, “I could be at the hospital. I could be dead.”

Ramahi suffered an ankle injury, but nobody else at the store was hurt.

The store has been open since 2004, but this is only the second time it has been robbed. But while the past 13 years have been largely peaceful, both of the crimes occurred in the past six months, though police don’t believe they were connected. Remahi said that if he’s faced with another robber, he’ll make the same decision: “He’s not gonna shock me or make me scared or having a phobia, nothing like that. He just makes me stronger.”

Police have not released any other information on the robbery and are asking the public for help with leads.

This story was originally published November 7, 2017.

RELATED: An Apartment Complex is Stunned After a Mother is Charged with the Murder of Her Toddler