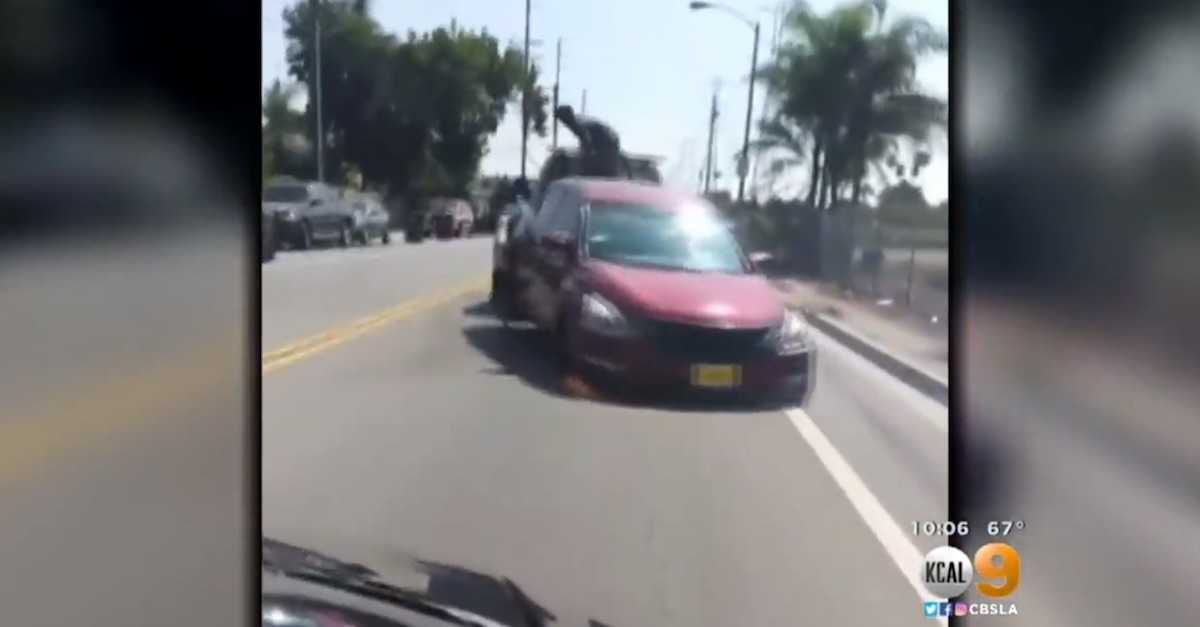 A video filmed by a couple on the road in Compton, Calif. shows a man’s seriously determined attempt to prevent his car from being repossessed. Brittany McDonald and James Harris were minding their own business around 10 a.m. when this wild scene started unfolding in front of their vehicle, which they then filmed.

CBS Los Angeles reported that the car was parked on the street and was repossessed because car payments had lapsed. The owner took exception to the towing, hopped on the tow truck in an attempt to unhook his car and even smashed his adversary’s window with a crowbar.

RELATED: A road raging TV producer yelled that everyone was “under a citizen’s arrest,” and it only got weirder from there

McDonald and Harris gave NBC4 the scoop on what they saw. McDonald said that she saw “black smoke” and “a guy rolling on the street” in her rearview mirror, but didn’t know what was going on.

Harris seemed sure that it was a simple case of a man going to great effort to get his car back. Harris said the man “flipped off” the driver, chased the tow truck for a few blocks and may have gotten a ride from another person to catch up. The chase went on for a solid 10 minutes before police finally arrived on the scene.

Both the tow truck driver and the angry car owner were questioned about the incident. Although both men were allowed to leave the scene, it is the car owner who could be in deep trouble. According to the New York Daily News, he may face vandalism charges. Additional charges are also possible.

RELATED: Watch a road raging man try running his ex’s Ford Mustang off the road — the 911 call was absolutely terrifying