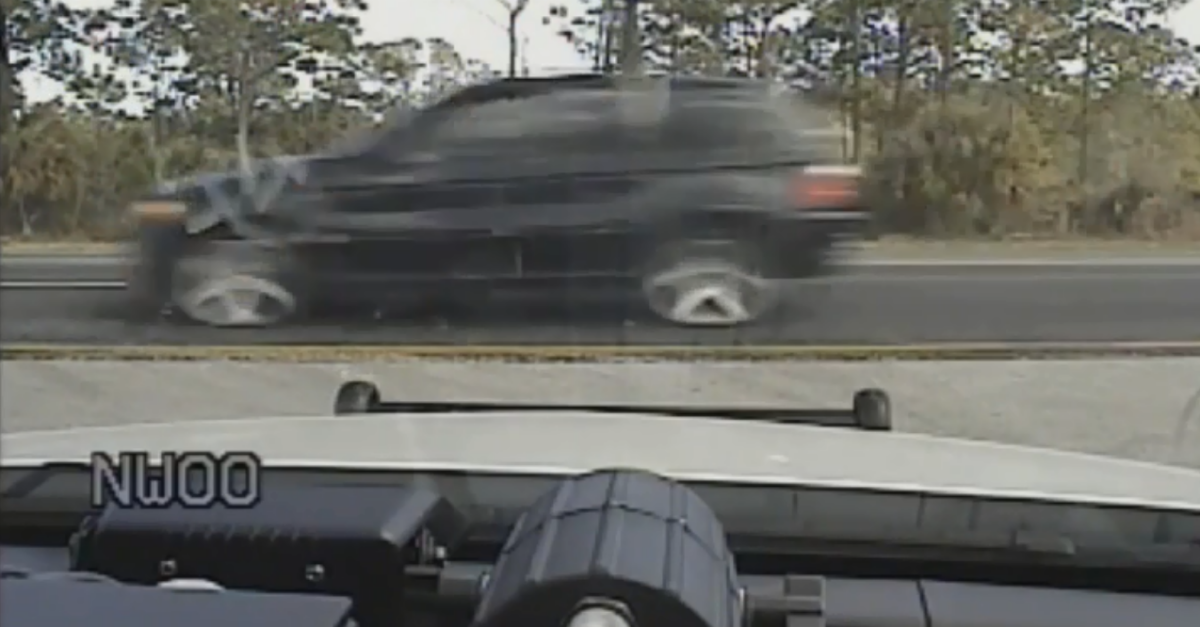 A Florida man called 911 dispatch after he alleged that his gas pedal became stuck while he was going 100 mph.

Joseph Cooper, 28, of Palm Coast, Florida was going 100 mph in his BMW while driving down I-95, reports CBS 12. Cooper called dispatch in a frenzy, saying that his gas pedal was stuck. No matter what he tried, he said, he couldn’t slow down.

Cooper could be heard cursing and shouting at people to get out of the way while the dispatcher informed him that authorities were on their way to help.

The full call can be heard via Vero News here.

Law enforcement officers with the Florida Highway Patrol and the Fellsmere Police Department helped manage the situation by blocking off entrance ramps and controlling traffic. They deployed stop sticks to help slow Cooper down.

A dash camera captured the moment his tires were blown out.

Cooper was taken to Indian River Medical Center for evaluation after saying that he felt pain in his chest.

BMW has since called the scenario impossible in a statement:

Based on the articles we have seen, the scenario described is implausible to BMW and we would be happy to work with the Florida State Police to investigate the cause of this incident.

BMW drivers have long been able to rely on integrated safety systems that help ensure safe operation of every BMW vehicle. All BMW vehicles, including the 2003 X5 described in this incident, employ an electronic accelerator pedal which uses software logic to override the accelerator whenever the brake pedal is pressed while driving. This fail-safe software means that if the vehicle detects that both pedals are depressed, the on-board electronics will reduce engine power so that the driver may stop safely.

The vehicle could also have been stopped by two additional means: By placing the transmission in neutral and coasting to a stop and/or by shutting off the ignition without removing the key. This is accomplished by turning the key counterclockwise. The engine would have shut off and the driver could have safely coasted the vehicle to a stop.

This story was originally published February 14, 2018.

Watch: A Florida Man Called Police When He Noticed Someone Driving Under the Influence ? Himself