A wild incident took place in Burbank, Calif., over the weekend that appears to be a car sale gone very, very wrong, and it was all caught on video.

RELATED: An unlicensed driver ran down three California pedestrians as they walked home from getting ice cream

The footage shows a man in red pants running off with a bag that the world would soon learn was filled with fat stacks of cash. Police, proceeding on witness statements, have been told that this was a car deal that fell apart, and that the man in the red pants was the salesman, according to CBS Los Angeles.

Witnesses said he grabbed the cash, took off on a mad dash and got some road rash. The man behind the wheel of the black SUV hit the unidentified fugitive and sent him skidding on the pavement.

The man in the red pants was unharmed enough to grab some money and run to a getaway car. The dudes who were chasing him could be seen moments later collecting the rest of the money in the middle of the street and in broad daylight.

“I saw the truck chasing the guy in the red pants. And then it just smacked right into him and he flew 20 to 30 feet in the air,” one witness told CBS Los Angeles. “Guy in the red pants had a bag in his hand and he was being chased by this guy in a white shirt.”

“The bag spilled out tons and tons of cash. Somehow he was able to pick a few of the stacks of money up, and then he took off running.” the witness continued.

Here’s the weirdest part: somehow it’s in doubt as to whether hitting the man in the red pants was intentional. All you have to do is watch the video once to see what’s going on.

What you hear is an engine rev, not someone slamming on the brakes.

The witness said that “it definitely looked intentional,” but police are working to determine if that was the case.

RELATED: A 15-year-old girl who allegedly shoplifted candy and was recorded being manhandled by the store’s staff was charged with a felony

Authorities have a license plate, so it should only be a matter of time. 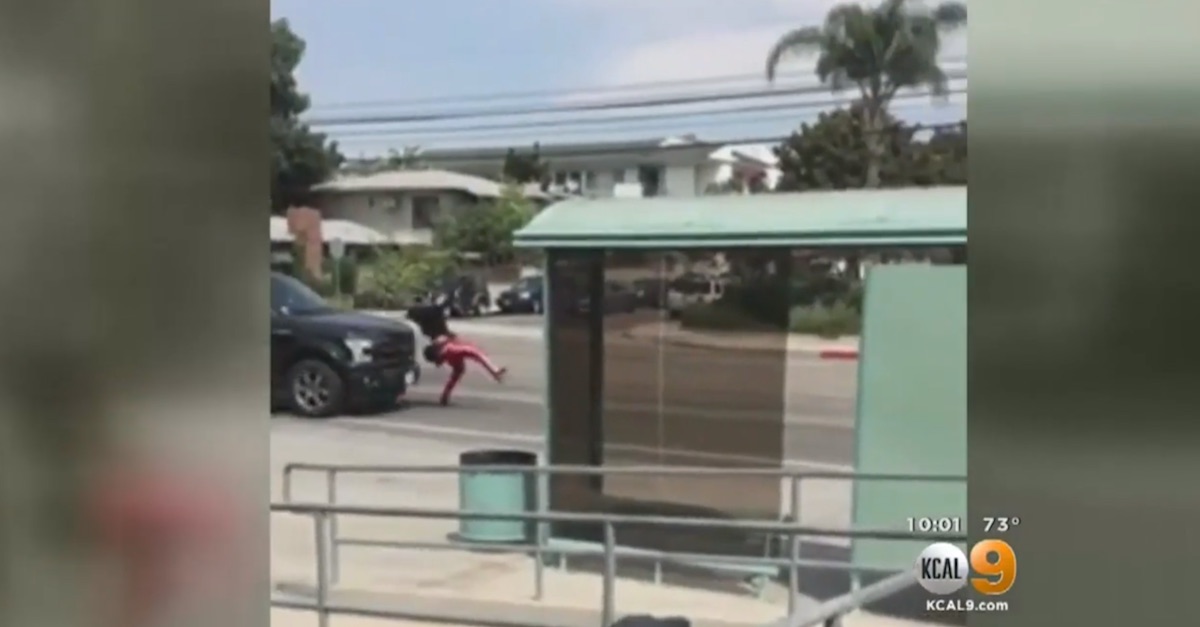