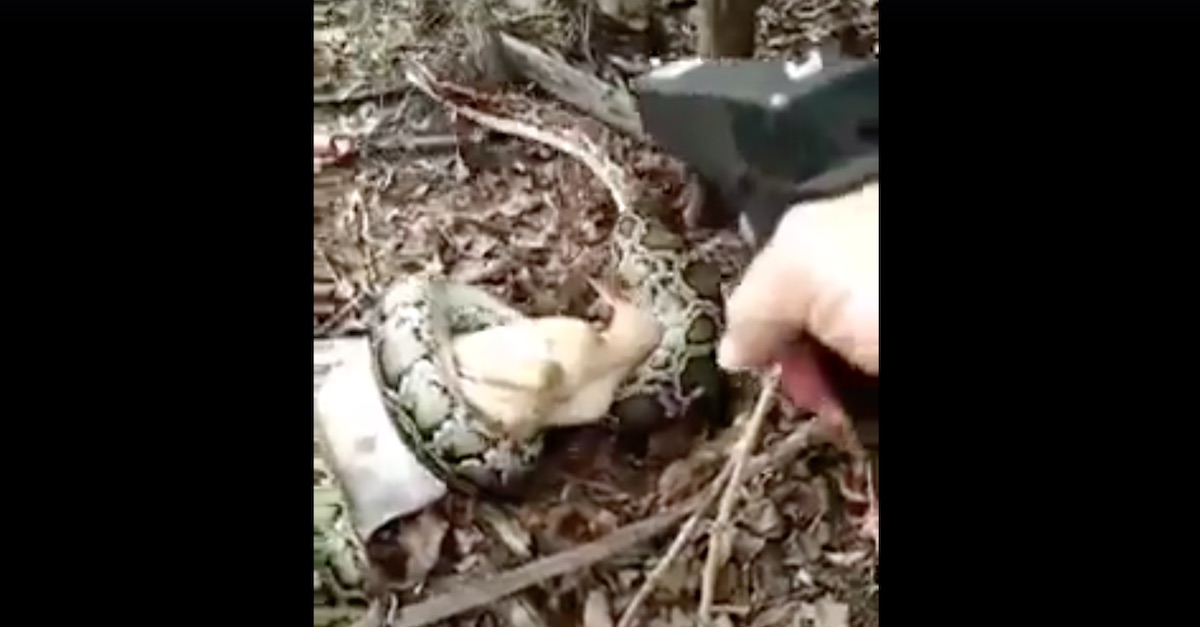 A goat is no longer with us after running into a baaaaad 12-foot python in the wilderness we call Florida.

RELATED: All you need is one word to freak out about the number of pythons caught in Florida since the hunt began

A video posted on Facebook by WINK-TV’s Channing Frampton showed the horrible demise of the goat.

“WARNING: This video may be disturbing to some. Rachel Elizabeth Valverde posted this video Friday,” Frampton wrote. “She says ’12ft Python thought eating one of our goats for dinner was a good idea!’ It’s unclear where exactly this took place, but Rachel says she lives in the Naples, FL area.”

Valverde said the python ate one her family’s goats for dinner in Naples, Fla.

As of May 15 this year, bounty hunters being paid by the state of Florida to take care of the Burmese python problem in the Everglades had bagged a ton’s worth of the snakes mere weeks after the snake hunt program began.

Add this 12-foot python to the scale.

The Associated Press reported that the Florida House voted in April to enter into competitive bid contracts with private bounty hunters to take down pythons, lionfish and other invasive species in the Everglades.

The going rate has been $8.10 per hourly and monthly bonuses based on the size of the captured snakes.

According to Weather.com, bounty hunters have been paid $50 for every 4-foot snake they catch and $25 for each additional foot. If a python is caught nesting, that’s an additional $150.

The National Park Service has said that pythons in the Everglades have been wrecking the ecosystem and are about as invasive as can be:

We can now count this goat among the casualties.