Meanwhile in Dublin, Calif., a multi-million dollar water park has closed a ride almost immediately after opening it.

RELATED: Get the Slip N’ Slide do’s and don’ts as you watch these folks fail in monumental fashion

An incident occurred at the “The Wave” water park, a $43 million facility, on its grand opening Saturday, and it was all caught on video.

A 10-year-old boy who was enjoying his first experience of the “Emerald Plunge” water slide can be seen flying off of the slide and onto concrete before skidding to a stop.

According to the East Bay Times, the boy was able to walk it off and only suffered scratches. From the looks of the video, the boy wasn’t doing anything reckless on the slide, which, by the way, had only been open for an hour and a half.

The park shut down the slide immediately and indefinitely. It is said that the park is “reevaluating that slide” and that it won’t reopen until they find out what caused the nasty spill.

RELATED: A Kansas City water park just made this huge announcement about the slide that decapitated a 10-year-old boy

The slide drops at an 80-degree angle, a decline that is described on the park website as “severe.”

The park maintained that the slide riders are supposed to cross their arms and legs, and the boy’s legs, in this case, were apart.

Looking at the video, though, it’s hard to say the boy did anything out of the ordinary, even if his legs weren’t perfectly crossed.

Regardless, parents should be alert when it comes to these Summer attractions. Last year, a boy was decapitated on a water slide in Kansas City.

Here's a photo of Caleb Schwab, who died at Schiltterbahn today. pic.twitter.com/e7SMmJmTfE

Just weeks ago, it was determined that the Schwab family would receive $19,732,125 in settlement money for their son’s death.

It is believed that the raft Caleb was riding in with two adult women went airborne and came into contact with safety netting, resulting in the decapitation of the boy.

The Verrückt water slide at Schlitterban that Caleb Schwab died on is 17 stories tall, 14 stories taller than the “Emerald Plunge.” 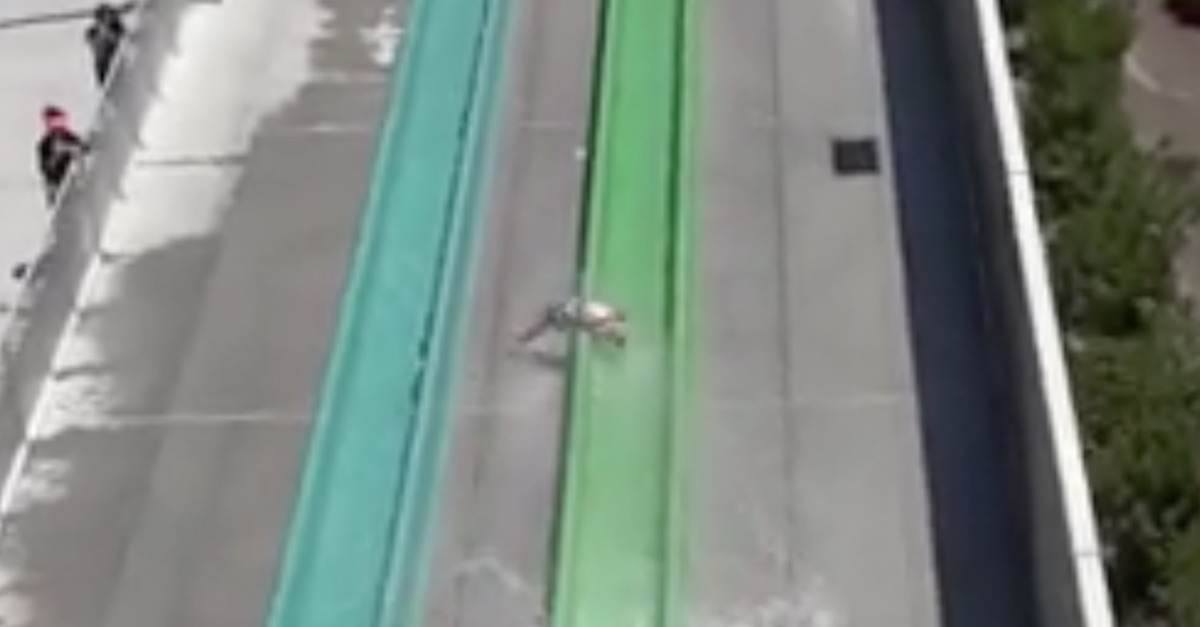