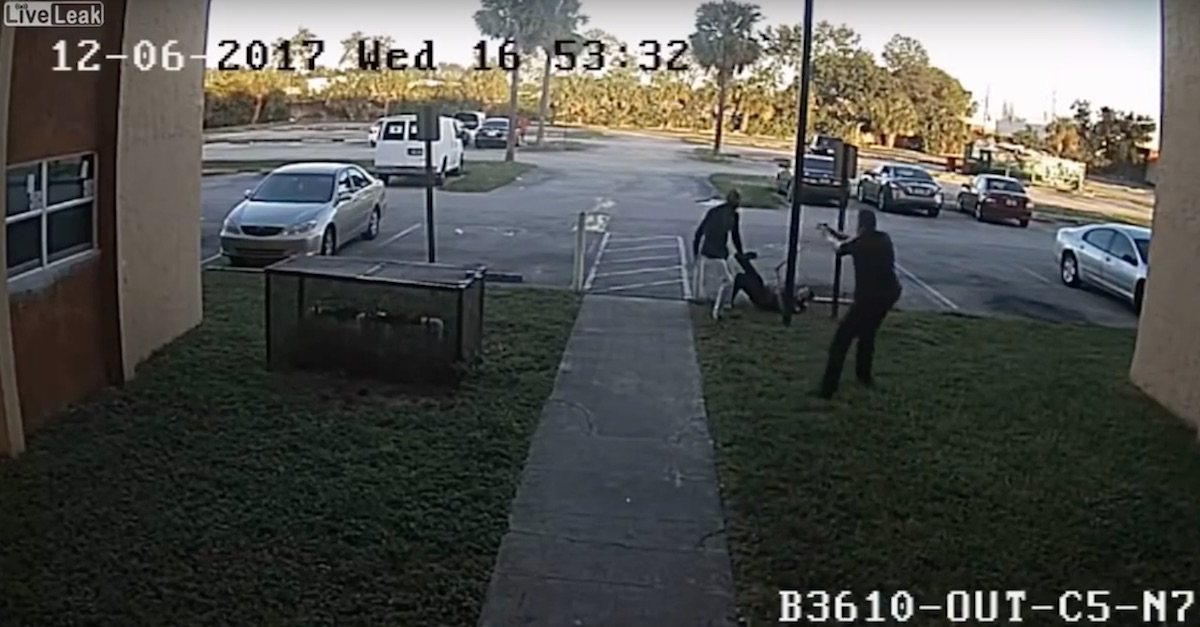 A Florida resident died from injuries sustained in a police-related shooting that was captured on camera.

Broward County Sheriff’s Deputy Sean Youngward responded to the report of a disturbance in a Lauderdale Lakes apartment complex. Jean Pedro Pierre, 42, tussled with Youngward. The tussle can be seen in footage taken by Youngward’s body camera, which was shared by Local 10 ABC News.

“Step back for who? For you,” Pierre asked. Youngward ordered Pierre to stand down, but Pierre continued to press forward.

Youngward is seen deploying his Taser, but it was ineffective.

By the time the men are outside and Pierre holds his leg, Youngward is heard telling Pierre to inform him “what is the problem,” referring to the police call that was made.

A second deputy, Deputy Steven Briggs, is heard shouting “Get your hands off him now” and “Get off him,” before Pierre charges toward him, and the officer fires.

Toward the end of the video, Youngward is heard recounting the events.

A video shot by a bystander, which was shared by Romeo Pericles with the Miami Herald, showed Youngward on his back while Pierre held his foot. The man behind the camera can be heard telling Pierre to let go of Youngward’s leg. Another voice in the background does the same, warning him to “think smart.”

The sounds of sirens could be heard in the background, prompting the men to tell Pierre once again to let go, because there were more officers arriving.

Briggs arrived on the scene with his weapon raised as Pierre continued to hold onto and kick Youngward on the ground.

“Tase him, don’t shoot him,” the men begged Briggs as Pierre began to charge him.

Briggs opened fire on Pierre, shooting him in the parking lot, while the men behind the camera reacted in shock. The video continued for another minute, capturing the police response to the shooting.

To Pierre’s family, Israel said, “I cannot imagine what you are going through. I am praying that God sustains you through this most difficult of times.”

Israel announced that for the sake of impartiality, a grand jury would determine if the shooting was justified, rather than the sheriff’s office or the Florida Department of Law Enforcement.

Pierre’s family reacted to his death with sadness.

Guilaine Jean, his sister, said “This is not my brother. He was not a violent person. He was a good guy.”

Pierre’s daughter, Shania, said her father had not fully recovered after suffering a stroke several years prior.

“I know my dad didn’t mean it,” she said. “He didn’t mean it at all. My dad, he had a mental health issue that nobody knew about, and I wish the police knew about it before killing him.”

His son, Ralph Fenelon, said the deputies “didn’t have to kill him at all.” Fenelon referred to their Tasers as an alternative.

RELATED: Frightening body cam video shows just how quickly cops need to react to someone charging with a weapon