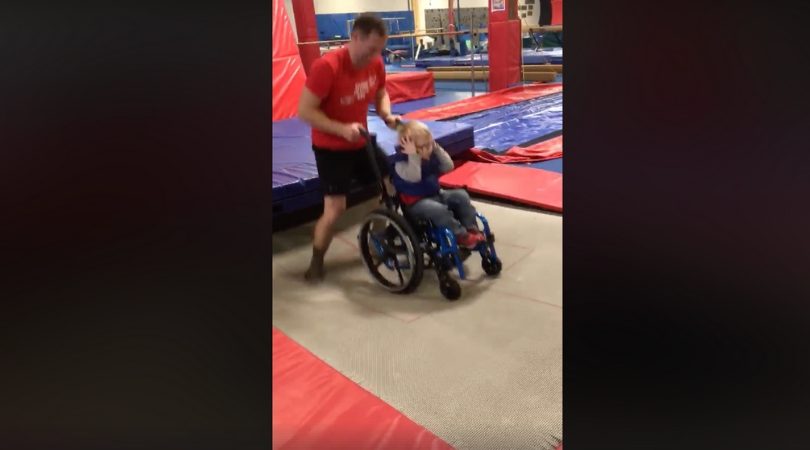 A sweet viral video of a young boy in a wheelchair bouncing up and down on a trampoline captured the hearts of many online users. 4-year-old Wyatt, who has spina bifida, decided to spend the day with his family jumping around at TNT Fitness in Fargo, North Dakota, despite his condition.

Spina bifida is a birth defect of the spine. The condition targets the spinal cord and nerves and can cause physical and intellectual disabilities ranging from mild to severe. Most common symptoms of spina bifida include walking and mobility problems, bowel and bladder problems, and accumulation of fluid in the brain.

Safe to say that for Wyatt, spina bifida or being in a wheelchair doesn’t stop him from reaching new heights. The 4-year-old boy was able to participate during the gym’s Giving Hearts Day, a 24-hour charitable event in North Dakota and Minnesota in which donations are allocated to several charities in that area for children with special needs.

From the start of the video, which has since gone viral with over 70,000 shares, you can see how Wyatt’s smile is contagious, as he tells the employee, a truly amazing man, bouncing along with him to go faster. Kim Pladson told KVRR, “I think it’s pretty hard not to think that Wyatt with his glasses bumping up and down on his face and yelling to go faster or higher wasn’t something that wasn’t going to capture your heart.”

Wyatt’s mother, Allison Burggraff, said she was surprised at her son’s adaptability, thinking it wasn’t possible for a wheelchair to jump up and down on a trampoline.

Wyatt’s mom said he has been going to the fitness center once a week for the last two years, and it’s a special place for his family to have a good time together. TNT Kid’s Fitness & Gymnastics originally opened in 2009 and began with a clientele of 100 children. Now, a decade later, they serve more than 2,000 children per week, complete with a gymnastics facility and a trampoline park.

What an inspirational moment, it goes to show you that sometimes you have to see the bright side of things, despite how bad you think they are. Today’s most valuable lesson came from a cute 4-year-old.

Editor’s note: This article was originally published on February 20, 2019.