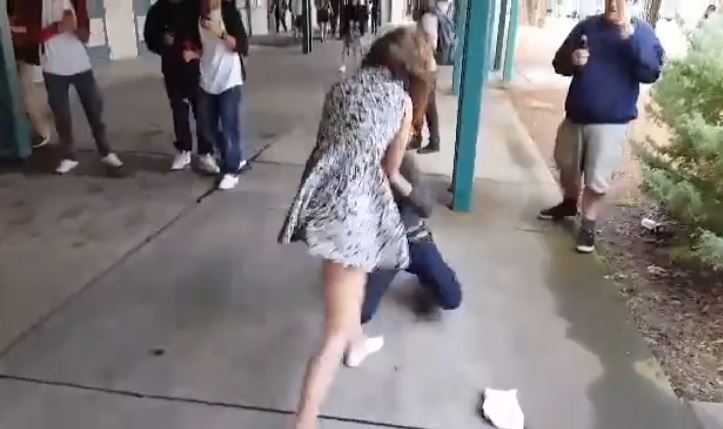 Is this girl a Ronda Rousey in the making? Because that was a serious beatdown she pulled off. I think we need to call the WWE because this girl has got some serious moves!

According to ABC 7, this whole incident began when the soon-to-be recipient of the beatdown posted mean things on the girl’s Facebook page. When she confronted him at school about it, he threw water on her. That’s when she went all MMA fighter on him because honestly, he deserved it.

The incident got the attention Brazilian jiu-jitsu fighter Kit Dale, who got the girl’s permission to post the fight on his Facebook page.

“I always encourage people to learn martial arts to one, have the confidence to walk away so it doesn’t affect you, but if it does and you don’t have anywhere to back away, sometimes you’re going to need that to protect yourself,” Dale said.

Apparently, the girl was eventually suspended, and the boy had a black eye that lasted a few weeks, but was still able to attend school. Which I mean, you totally understand why she was suspended, but hey, you get what you deserve right? If you are going to bully someone, don’t expect them to not defend themselves.

You definitely messed with the wrong person there, buddy. Here’s hoping he has another MMA-style thrashing in his future. Give this girl a metal!