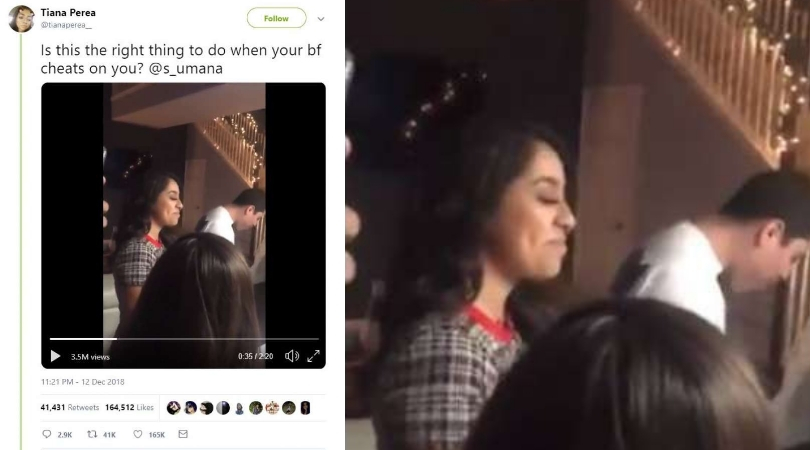 Relationships. What can I say about them, you win some, you lose some. It?s okay, it happens. Sometimes things just don?t work out because well, it wasn?t a match. But sometimes, just sometimes things don?t work out because one decides to give up and cheat. And boy, oh boy, this dumb man didn?t see it coming. Let me tell you, there is nothing worse than an angry girlfriend.

Like in Tiana Perea?s case, where she decided to bash out her ex-boyfriend the most epic way ever. Perea, from Houston, decided to blast her ex-boyfriend for cheating. And while most us would shy away from any public sharing of that sort, she decided to publicly shame the man and post it on the internet. Of course, it goes without saying that the footage went viral instantly, and I have to say, props to her. I admire you big time, Tiana.

The viral video shows Tiana celebrating her birthday with friends at her house, before shining the light on the whole cheating scenario. After a few shots, of what I can only imagine was Tequila, because duh, Perea thanks her guest for attending the event. She then uses her liquor courage to speak about her boyfriend. She begins to explain how she is grateful for him, making her realize that she deserves so much better, before calling him out for talking to another girl.

She states, “All of us have seen screenshots … you were sexting her and sending her videos,” she says accusingly. In case you didn’t figure it out, we’re over and you can get the f**k out.” Yikes, yikes, yikes!

But wait, it gets better! Perea ends her tirade with one last bang as her conspiring brother comes down the stairs carrying the poor bastards bag! Safe to say everyone was proud and happy after all the cheering and disclaimers of how he was doomed started to arise. So yeah, there you have it! Revenge served cold on a dirty dish. I hope his mother doesn’t see that video.

Editors note: This article was originally published on December 19, 2018.