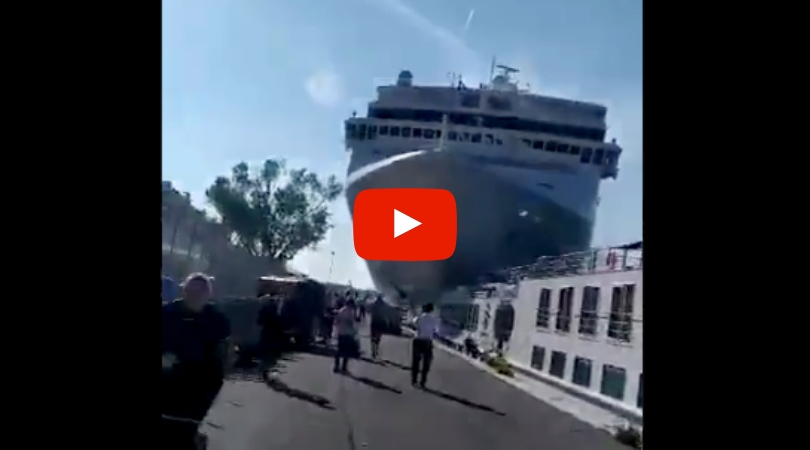 A terrifying video shows as a cruise ship crashes into a Venice dock, hitting a moored tourist boat, sending onlookers running for safety. The cruise ship, MSC Opera, rammed into the San Basilio terminal, hitting the River Countess. The incident happened on the Giudecca canal, which is one of the busiest in the Italian city, and hugely popular with tourists. The crash comes just days after a similar crash left 28 people feared dead in Hungary.

Video on Twitter showed the huge cruise ship heading toward the dock unable to stop, repeatedly blaring its horn as it shoved the River Countess and pushing it into the dock and out-of-the-way. According to the MSC Cruises ship operator, the vessel, which can carry over 2,675 passengers in 1,071 cabins, “experienced a technical issue” while heading towards the terminal for mooring. As far as what exactly caused the crash is still being investigated, but the ship received authorization to be moored at the Marittima terminal as it originally planned to.

Authorities hope to create a solution to the traffic of large ships in the Venice area, with the country’s Environment Minister, Sergio Costa, saying the incident is a “confirmation” that cruise ships should not sail down the Giudecca canal. Costa stated, “What happened in the port of Venezia is the confirmation of what we have been saying for a long time: the Grandi Navi must not pass through Giudecca. This is why for months we have been working with the ministers Danilo Toninelli and  Bonisoli Alberto to move them and we are close to the solution.”

Medical authorities said four women were injured, all between the ages of 67 to 72. The women were hurt while running away or falling while the massive cruise ship crashed into them. One was released shortly after arriving at the hospital, but the other three were advised to remain under medical care for a few days.

This is terrifying, especially since 111 people were on the river cruise boat. Can you imagine? That’s more than 100 people’s lives in danger, this could have been a tragedy. Although it was an accident and there really isn’t anyone to blame since it was a mechanical problem, there really should be more security measures when it comes to docks and cruise ships. Thank God the port had a high wall because it could have easily hit the crowd of people standing around.

The crash came three days after a tour boat carrying 33 South Korean tourists sunk in Hungary after getting hit by another ship on the Danube River. Seven were pronounced dead and 21 are still missing, but authorities have stated it seems unlikely more survivors will be found. Hungarian police launched a full criminal investigation, confirming the captain of the cruise ship, 64-year-old Yuriy C., had been detained and questioned.