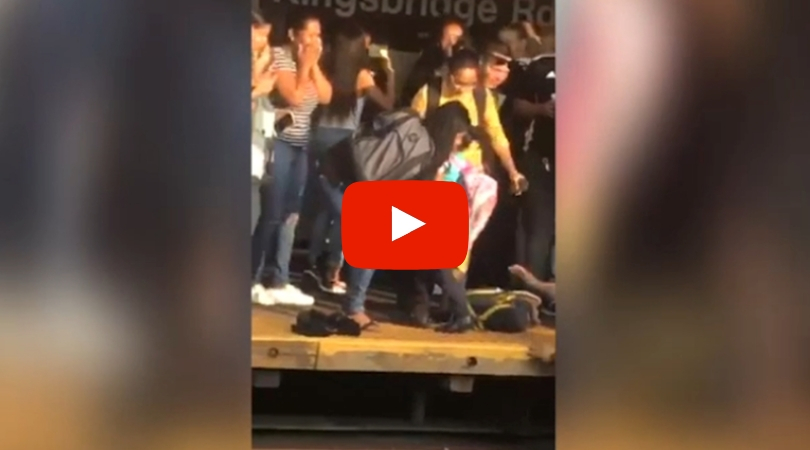 A man on a mission to commit suicide tragically died after jumping in front of a moving subway train in the Bronx while holding on to his 5-year-old daughter. Luckily, the young girl only suffered minor injuries and was saved by a bystander who saw the incident and jumped onto the Kingsbridge Road Station tracks to grab her.

According to witnesses, the 45-year-old man had the girl in his wrists and arms, and without hesitation jumped down in front of the subway train. The train platform was said to be packed with commuters during rush hour, with several bystanders trying to wave down the train operator as he rounded the corner and pulled into the station. Despite the train attempting to slow down, the train ran both individuals over.

When the train ultimately stopped, two bystanders quickly jumped onto the subway tracks hoping to find the girl. Video then shows the girl crawling under the train, slowly making her way to the two men calling out for her. Once she reached one of the men, he carries her and puts her on the platform to make sure she doesn’t have any life-threatening injuries.

When emergency responders arrived at the scene they immediately pronounced the father dead. The child was luckily not hit by the train but was taken to Jacobi Medical Center to be treated for minor scratches. Authorities believe the little girl was small enough to be able to crawl under the train and avoid the hit.

Witnesses who saw the man before the incident stated he appeared to be calm and was on the phone with his wife. A witness then heard him telling her that she had to look out for their other two kids, and he was going to take his daughter to school. The man then said he loved her before jumping off. It is still unclear why the man jumped in the first place

If you are struggling with thoughts of suicide or are worried about a friend or loved one, you can call the National Suicide Prevention Lifeline at 1-800-273-TALK (8255), or visit suicidepreventionlifeline.org for free confidential emotional support.