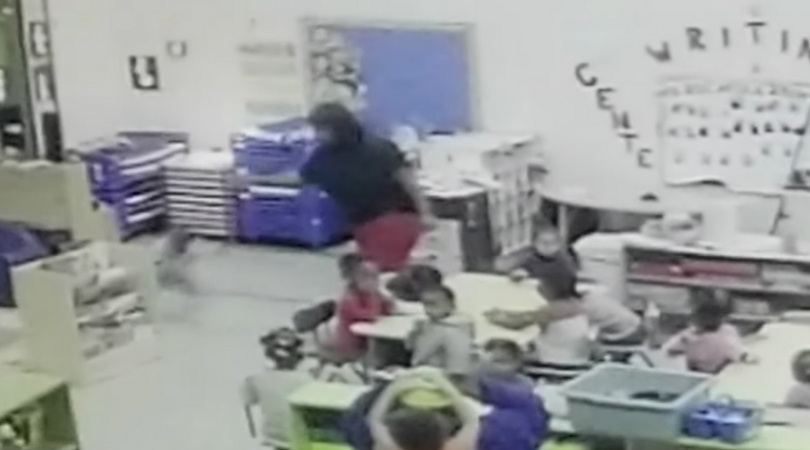 An employee at Brighter Daycare and Preschool in North St. Luis County Missouri was fired after a 3-year-old had to get seven stitches and remained in the hospital for 3 days due to an infection after the employee threw her against a cabinet. The surveillance video shows the alleged assault, where the child who appears to be calm is standing beside a chair before the teacher walks across the room.

The employee then grabs the child?s arm, drags her away from the other children and flings her against a cabinet. The child split her head and was immediately taken to the hospital for treatment. The teacher allegedly sent a note home to the child?s parent saying she had fallen on the floor after slipping on the carpet.

According to the family’s attorney, the parents would not have known it was an assault if they hadn’t seen the video. What shocked the parents more was the fact that the daycare Director Sharon Williams told them she did not watch the surveillance tape until the family was with her, five days after the incident.

A family member filmed the surveillance footage with their cell phone, shocked that the incident did not appear to be an accident. The daycare worker continued to work at the daycare, five days before being fired. State child care inspectors and Missouri police currently investigating the incident.

Despite the accusations, the day care’s attorney released a statement saying they continue to provide a safe environment for the children.

?All teachers and staff are properly trained and extremely qualified. Providing quality education in a safe environment is of the utmost importance to our teachers and staff. It has always been our policy to notify the proper authorities and to fully comply with any investigation. We have and will continue to follow said policy.?

Unfortunately, this is not the first incident of assault the daycare has been accused of. Past incidents include a child who was slammed down on a cot and other child being dragged across a room in May 2018. In June 2016, inspectors stated “staff did not have a preventative plan in place” when a child was repeatedly hitting and choking another child, and in March 2016, inspectors wrote that a child fell out of the chair and sustained a left femoral fracture.

Editor’s note: This article was originally published on February 28, 2019.