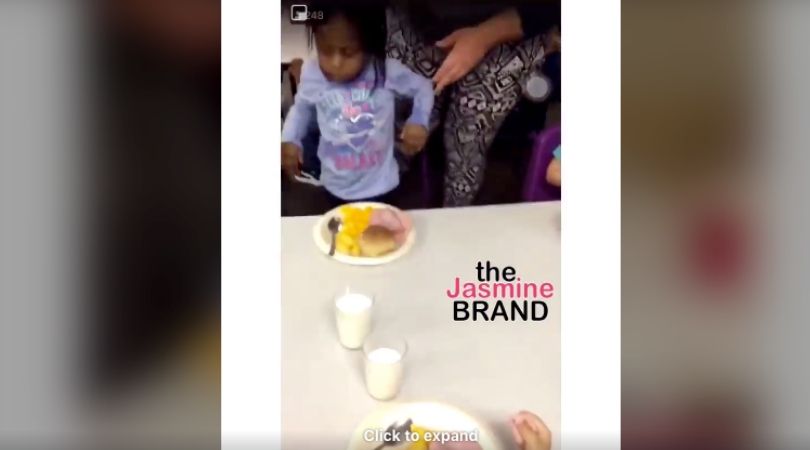 A Texas daycare is under investigation after a video went viral on social media, showing one of it’s employing pulling a 3-year-old girl’s hair. In the video, one can see a daycare worker at My Little Playhouse Center pulling on Amyra Wilson’s braids, to stop her from falling asleep, forcing her to eat.

The employee is heard saying, “No ma’am, eat your food,” as she grabs on and pulls on the child’s hair harshly from the lunch table to sit her straight. She is then heard saying, “She’s for real making me mad,” as she briefly lets go of the child, and grabs her hair once more, yanking her backward as she tries to leave the table. The person behind the camera, who was identified as another employee, is heard laughing throughout the video.

Amyra parents saw the video online, and were horrified by the incident. Her mother, Laquitta Wilson said both parents were an emotional wreck, and were angry and hurt at the same time. Wilson not only believed her daughter was physically abused by an adult who they paid for, but was scared for the safety not only of her daughter but other children.

Amyra’s mother wasn’t the only one who was upset about the whole situation. The video has now gained more than 3,000 comments, where users are both shocked and outraged. The case is currently under investigation by the Lubbock Police Department, but My Little Playhouse Learning Center released a statement saying both daycare employees involved were immediately fired after owners saw the video. No one has been arrested or charged at the time. The daycare added that both the Texas Department of Child Care Licensing and local authorities were made aware of the incident and are investigating the case.

This isn’t the first incident that occurs at the daycare. According to the Texas Department of Family and Protective Services, the daycare center has had over 19 violations since 2016, ranging from deficiencies in areas free from hazards to reaching their documentation training. The parents are now looking into taking legal action.

This whole situation is devastating. This little girl shouldn’t of have been treated that way, despite the situation. What scares me the most is not knowing if this was the first incident. If she was hurt like that, imagine how many other toddlers have suffered by the hands of these workers. Just something to think about. A little advice…maybe don’t work at a daycare center if you don’t have patience. Unless you want some assault charges and jail time.

This article was originally published on January 24, 2019.