Deputy Delivers Baby in the Backseat After Stopping Speeding Car 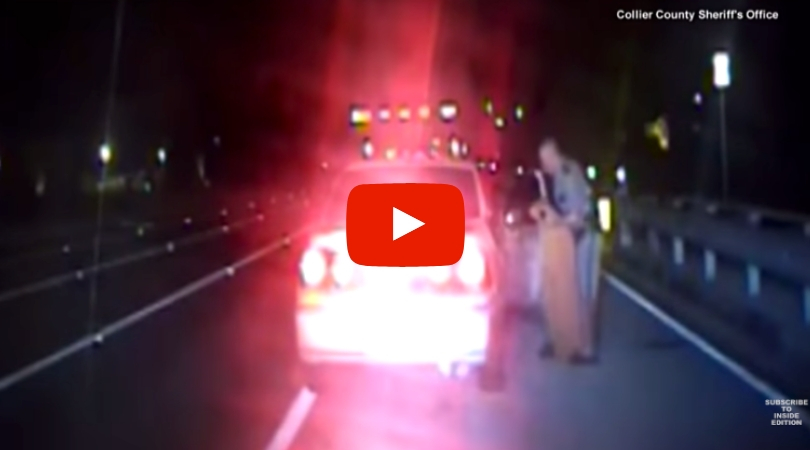 You know how they say that sometimes you’re just in the right place at the right time? Well, Deputy Robert Pounds is the perfect example of that statement. The Collier County Sheriff Deputy pulled over what he thought was a speeding car but decided not to give them a ticket. Why you ask? Because there was a woman in the backseat about to pop out a child.

Instead of giving them a hefty fine for going over 15 miles per hour over the speed limit, he helped deliver the baby himself. Luckily for us, it was all captured on dash-cam footage. You see the deputy approaching the car on the side of the road as the driver calmly tells him that he understood why he had stopped him. He then proceeded to say that he had a good reason for speeding. Jean-Louis Wilfrid can be heard frantically telling the Florida deputy that the baby’s head was almost out.

His wife, Fabienne Gorges, can be heard literally yelling her lungs out from the passenger seat. That’s when Pounds is seen running back to his patrol car and calls for backup units and an ambulance. He then grabs a pair of latex gloves and a sterile blanket and runs up to the woman’s side delivering the baby almost immediately.

He then asked Wilfrid if he is the father of a baby, saying ?congratulations, you have a baby girl.? Deputy Pounds, who has three children and has been in the delivery room before for each of them, said he had never been on the receiving end, which happened so quickly.

WAY TO GO! Deputy Pounds clocked a speeding car going 63 mph in a 45 mph zone. When he pulled the car over, he found out the passenger was about to give birth. The deputy ended up helping deliver a baby girl! 🙌👶 https://t.co/jwlBAErRcs

He credits the training he received as a Sheriff’s Office deputy which is what prepared them for the delivery of the baby on site. He stated, “I don?t get shook up too easily, but this was a little nerve-wracking just because it was a newborn. “My training kicked in and I just wanted to help mom and the baby.?

Pounds initially thought the couple trying to get out of a speeding ticket by saying the mother was in deliver. Apparently, a lot of people use his excuse whenever they get stopped for speeding, which I mean, I can totally see why. Nobody wants to deliver a baby in the car. But this time, he got the surprise of his life when he found that it was an actual baby. Imagine explaining that you delivered a baby behind a cop car to your wife as soon as you get home. Now that’s a story.