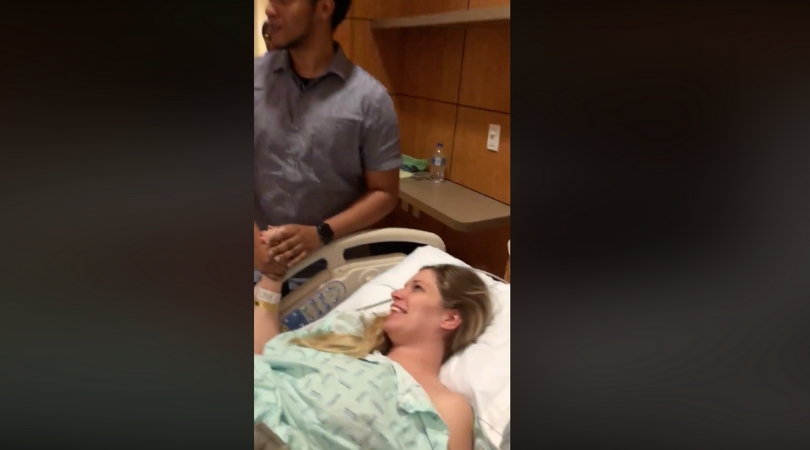 Leave it to your family to turn a scary situation into a fun hilarious viral video! A Texas couple not only welcomed their baby girl into the world but decided to turn the delivery room into a family musical performance. The video, which has made its way through social media, shows the family of Jadie Phelps and Jordan Houston singing a capella rendition of Salt-N-Peppa’s smashing hit ?Push It?, moments before the mother gave birth to their daughter.

Houston shared the video on Facebook, saying their daughter literally came 10 minutes after the family sang the song. Coincidence? Maybe, but the video sure was funny and impressive! Just hear how the family coordinates their voices, it’s magical.

The video features Houston and Phelps, along with the baby’s uncle, aunt, grandmother and nurses at Baylor All Saints Medical Center in Fort Worth, Texas. According to Houston, the impromptu concert came after Phelps had trouble coming up with a birth playlist, so they decided to create their own, and choose to make their own rendition of the famous 90?s R&B song. The video has gained over 13 million views with almost 180,000 shares on Facebook alone!

The couple doesn’t shy away from big performances though. They met while doing musical theater, and do freelance entertainment gigs from time to time, so it was second nature for them to burst out into a song and dance their way through their special moment.

Safe to say the internet loved the video, commenting on how they plan to use the song for their own childbirth. Others are praising the new mom for how calm and cheery she was while in labor. Props to her indeed! Congratulation to the happy couple on the birth of their third child, Alaya. Next time, maybe they can sing some classic Elvis?

This article was originally published on January 21, 2019.