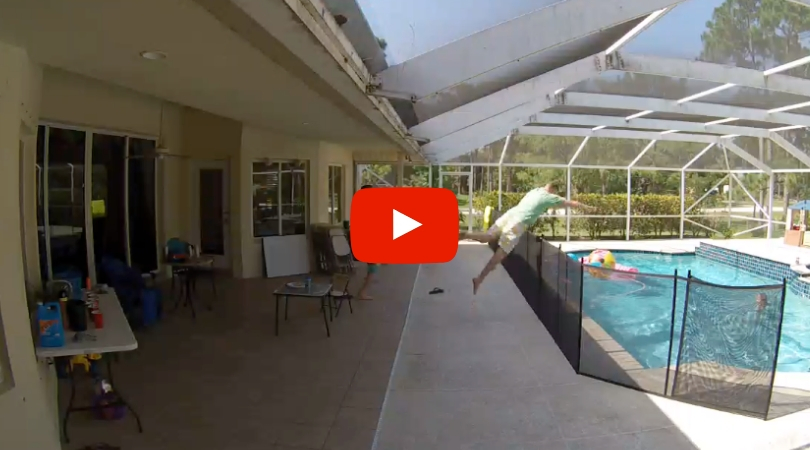 They say parents become superhumans whenever they see their child is in danger. They develop this super powerful adrenaline that later has them questioning just how they managed to do the unthinkable. Like in this case, where a 1 and a half-year-old boy named Rocco almost tragically drowned after falling into the pool. Albert Passavanti’s protective instinct was no joke after he was lounging by the pool in Palm Beach County, Florida. The toddler is seen chasing an inflatable ball, quickly losing his balance and falling into the pool.

The 1-year-old reportedly doesn’t know how to swim, so the father quickly sprung into action and literally bolted over a 4-foot-fence, diving straight into the water. And when I say bolt, I mean bolt! This man gave it no second thought and ran up to his kid like the Superman he is. Impressive indeed.

According to the Florida father, his instincts immediately kicked in and he didn’t even think about going around the fence, rather jumping it to gain quicker access to the boy, going from “point A to point B.” The fence was around one side of the pool and can work as a baby proof pool gate, but only when one closes them. So yeah, this is one lucky father, I tell ya!

Plus, it’s amazing it was able to be caught on video. Now every time the kid does something bad, the father can basically guilt trip him by telling the child he literally saved him from drowning by jumping a fence when he was one. This kid is doomed.

Now that summer is here, there are a lot of preventable measures that can be done to avoid a situation like this. Drowning is the number one cause of death among children between the ages of 1 and 4. According to the American Academy of Pediatrics, in 2017 alone almost 1,000 children in the United States drowned. For children ages 5 to 19, it is the third leading cause of unintentional injury-related deaths.

AAP urges parents to be within arm’s length whenever young children are around or in water. Parents should avoid becoming distracted by activities such as drinking alcohol or cell phone use and should never leave them unattended. Parents and caregivers are also reco
mmended to learn CPR and teach children water safety skills to avoid any accidents.

This article was originally published on June 27, 2019.