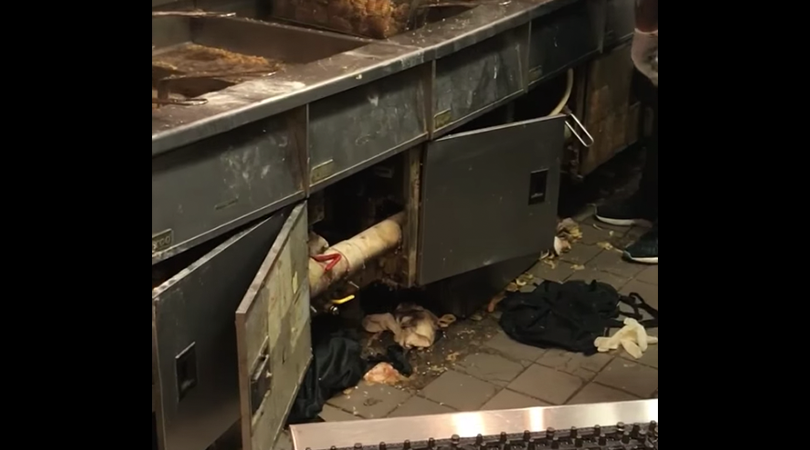 No one walks into a Hooters expecting what you would consider a clean experience. If the restaurant isn’t a little grimy your conscience might be by the time you leave. There are only so many middle-aged, divorced, small boat owners in Tommy Bahama Hawaiians and chin-strapped MMA enthusiasts you can watch get half-chubs while conversing somewhere on the spectrum of flirting to harassment with the waitresses before a little bit of their behavior — and the spilled beer on the floor — sticks to you. It’s great people watching, but there’s a price.

Even with that in mind the footage this customer took of a Hooters kitchen in Hampton, Virginia is jarring. It looks like a tornado of diarrhea hit a carnival’s food tent. The scene is indecent. The kitchen looks so vile that you’ll completely bypass being concerned for the safety of the food and go right to wondering if it’s even medically safe for people to be back there at all. This what the inside of Fukushima would’ve looked like if they were eating wings when the tsunami hit.

Any restaurant that cooks primarily with deep fryers is going to have an especially dirty kitchen. Grease evaporates out of the fryer and eventually condensates onto the walls and floor. In your lungs. The entire kitchen is covered in a thin film of it. Flour gets stuck to everything and clumps. After about a week of that kitchen being operational the only thing that’ll ever make it truly clean again is a fire.

The man who took the video, Kurt Fortner, claims he also witnessed the employees going from raw chicken wing prep to plating food for customers without so much as washing their hands. Basically, the entire experience of dining at this Hooters is a mildly dressed up version of eating raw chicken at the bottom of a dumpster.

Was the beer at least okay?