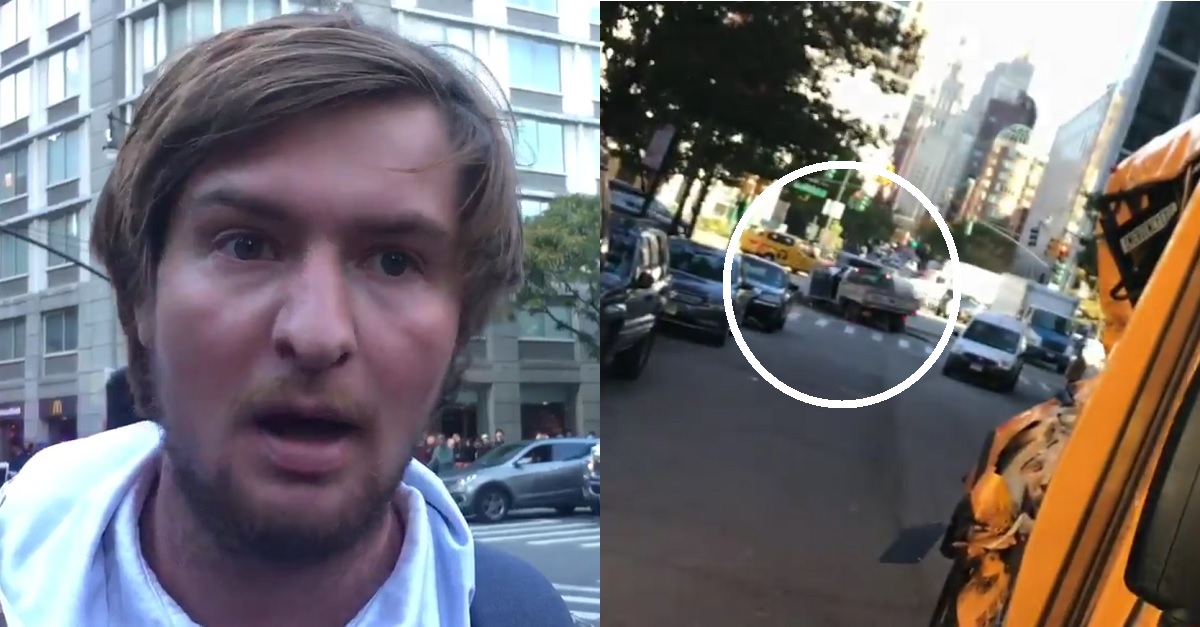 Saipov, 29, of Tampa, Florida, reportedly used a rental truck to mow down several pedestrians on a bicycle path in Lower Manhattan. Investigators later found a handwritten note inside of the truck claiming that the attack was carried out in the name of ISIS. The suspect also declared his allegiance to the Islamic State, leading some authorities to believe that he was inspired by the terror group, rather than ordered.

Saipov brandished fake guns during the incident, causing brief speculation that he was also shooting at his victims. Witness Tawhid Kabir Xisan captured Snapchat videos that allegedly show Saipov running down the street and the moment after an NYPD officer shot Saipov in the stomach. In one of the videos, he identified Saipov as the “Shooter in downtown.”

He later explained to CBS News that he was on a bridge when he initially saw the commotion, describing the reactions of those with him as “so scared.”

Witness John Williams reported “the smell of gun smoke, when I got there, was very, very strong.” NYPD confirmed that they were responsible for shots fired on the scene in order to subdue the suspect.

Sebastian Sobczak, another witness and founder of BeautifulGoal.Org, uploaded a video of a school bus that was hit by Saipov’s truck in the attack, confirmed by the NYPD. He told Rare, “The video starts right after I told the police that the gunman was in the intersection and then I hear gunshots. The bus driver is in the line of fire so I go behind the bus to help him, and the kids without realizing the other side of that bus.”

The video shows injured adults and children stuck in one area of the bus while metal and other materials protrude out of a gaping hole on the other side. The driver and Sobczak are seen calling police over and asking for an ambulance to help.

A shaken man identified as Mateo recalls seeing a “car crash” and “a dude with two guns,” speaking of the imitation guns. He said he and others ran when they heard about “four shots” shortly after seeing Saipov chased by officers.

Witness describes what he saw in Lower Manhattan pic.twitter.com/Fm3wdrkb10

Another said that Saipov “looked frustrated, panicked, confused” as he screamed in the street. The witness said he didn’t see any noticeable bleeding or guns, but that he did see a noticeable limp.