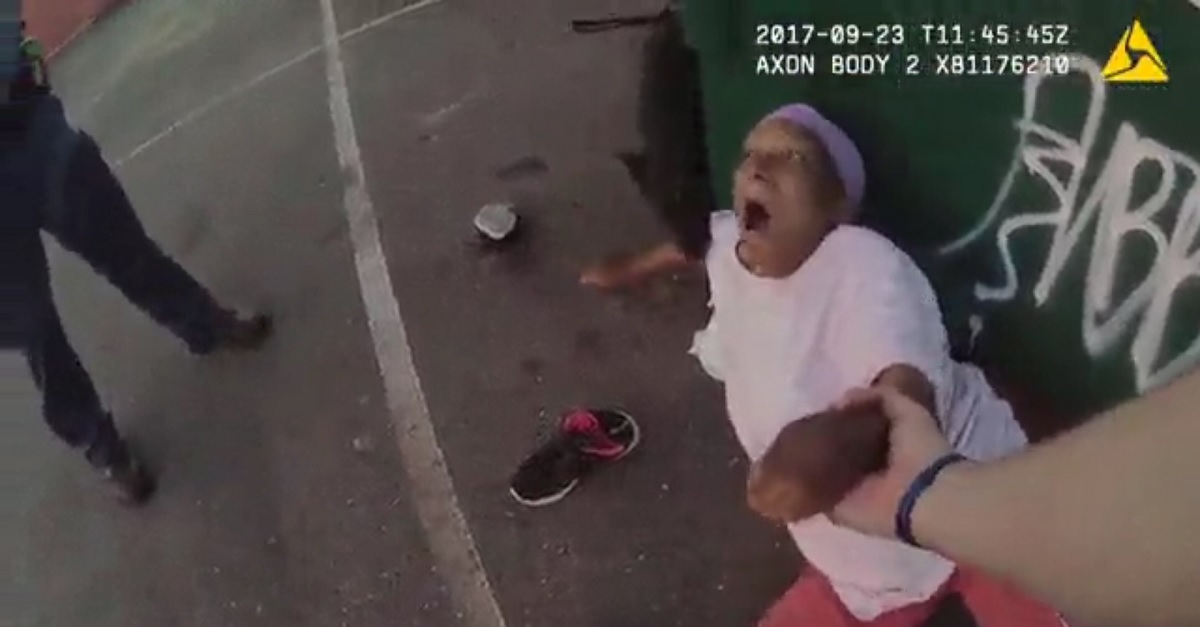 A Minneapolis woman is suing the St. Paul Police Department after one of their K9 units attacked and mauled her as she took out the trash.

Gabe, a trained police dog, was deployed with St. Paul officers as they searched for a burglary suspect just after dawn on the morning of September 23, reports the Minneapolis Star-Tribune. Instead, the group found Desiree Collins, 52 at the time of the incident, who was taking her trash out.

In police body camera footage released by plaintiff Desiree Collins and her attorney, the dog rounds the corner at a dumpster and immediately latches onto Collins, causing her to scream in pain. The lawsuit says that the dog ignored verbal commands and a shock collar and continued tearing at Collins’ leg and arm until his jaws were physically removed from her flesh.

RELATED: This carjacker proves why you never want to make a K9 mad

The 52 year old had to be hospitalized for wounds sustained in the 30-second attack. Her lawsuit says she required follow-up visits and outpatient care. Collins, whose left hand was amputated as a child, was unable to change her own bandages.

Department personnel records cited by the Star-Tribune say that Officer Thaddeus Schmidt, Gabe’s handler, was suspended for one day for allowing his dog to walk around a blind corner and out of his line of sight, as well as for failing to verbally announce the dog’s presence.

St. Paul Police Chief Todd Axtell called the incident a “terrible accident that should not have occurred.”

“I am sorry it happened and that she was injured,” he wrote in a statement released this week. “As a department, we wish we could go back and do things differently. Unfortunately, we can’t. What we can do is apologize and take responsibility.”

Axtell added that the department plans to “learn from the incident so we can continue to work to prevent it from happening to anyone else.”

That’s not enough for victim-turned-plaintiff Collins and her attorney. They say Collins’ Fourth Amendment rights were violated by the unprovoked attack on her, alleging that she was targeted by “excessive force” and “unreasonable seizure.”

They also say police were searching for suspects without a “visual target” or “definitive information” about the burglary suspects. Gabe and Officer Schmidt were involved in a similar incident — in nearly identical circumstances — last year, when Gabe bit an innocent person when he was, again, allowed to walk well in front of Schmidt on a long lead. He was disciplined after that incident as well. Gabe has been with the department since 2012.