“I will f—–g kill everybody!”: Woman lashes out on plane after sneaking bathroom cigarette 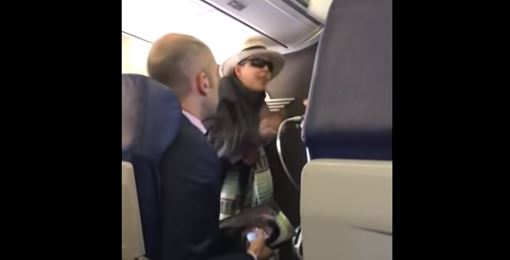 A woman who was caught smoking in an airplane lavatory and messing with the smoke detector was ordered back to her seat, at which point she went ballistic.

Valerie Curbelo, 24, was on a Southwest Airlines flight from Portland, Oregon, to Sacramento, California, a relatively short trip of about 90 minutes. Clearly, the trip was too long for Curbelo to go without a smoke, though.

When she was escorted back to her seat by flight attendants, she started on a disturbing outburst, screaming that she would “fucking kill” everybody on the plane if it didn’t land.

?I swear, if you don?t fucking land, I will fucking kill everybody on this fucking plane!? Curbelo shouted.

Southwest Airlines provided a statement about the strange incident to the Sacramento Bee:

?Our reports from flight attendants indicate a customer violated federal laws by both smoking onboard an aircraft and by tampering with a smoke detector in an aircraft restroom. Our Crew enforced the regulation and that was followed by the passenger outburst,? Southwest Airlines said. ?The safety of our crew and passengers is our top priority and we take all threats seriously.?

RELATED: 2 extremely naughty strangers got so hot and heavy on a Delta plane the FBI is involved

Curbelo was arrested and taken to jail, where she agreed to an interview with CBS13.

She said “the anxiety” she was experiencing is why she tried to sneak a cigarette into the restroom. However, in the interview, Curbelo couldn’t pinpoint anything that was actually making her anxious, and she also provided no explanation for why she threatened to kill everybody on the plane if it did not immediately land.

A passenger recorded her outburst once she was returned to her seat. He told CBS13 that she pushed a flight attendant and had to be physically restrained by passengers and crew for the remaining 30 minutes of the flight.

Curbelo hails from Sandy, Oregon, near Portland. She would not disclose why she was traveling to Sacramento.

Her trip did include a detour to the Sacramento County Jail where she was booked on the charge of making criminal threats.