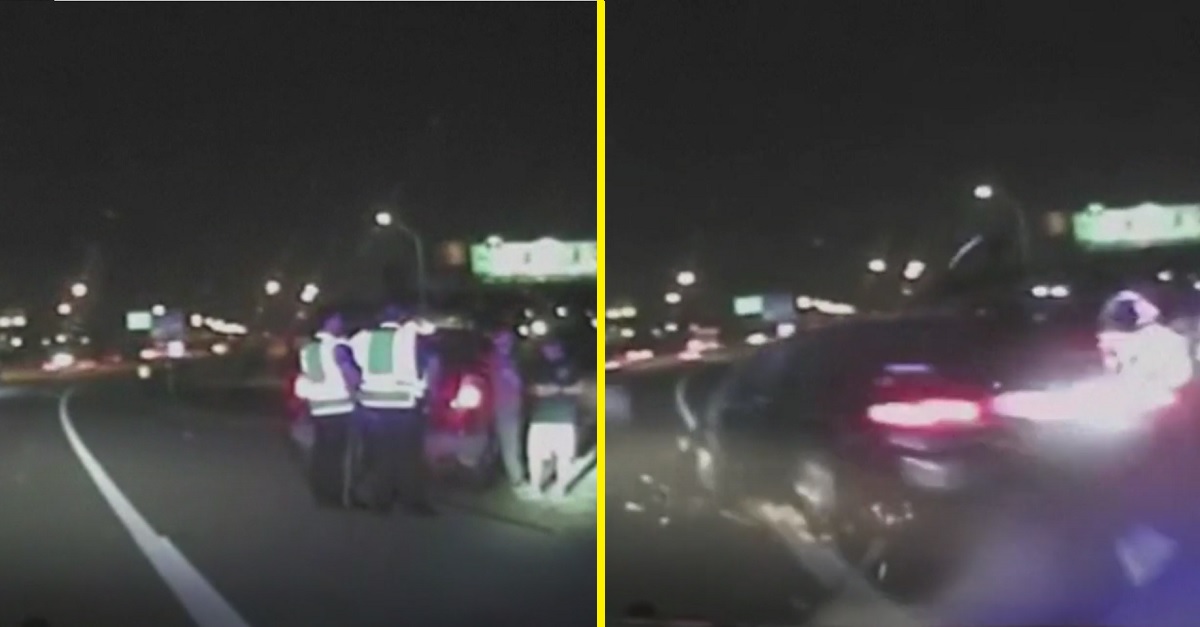 Five people, including three police officers, are lucky to be alive after a suspected drunk driver plowed into their stopped vehicles on the side of the road in Forest Hill, Texas.

Police officers had stopped to tend to a disabled car along Southeast Loop 820, according to the Star-Telegram. They were waiting on a tow truck — with full lights and everything — when the unthinkable happened. A car headed straight for them, and every terrifying second was caught on dashcam video.

RELATED: Mom tucks in drunk, naked man thinking he was her son, and it only got funnier from there

One officer clearly notices the speeding vehicle first and helps shove everyone out of the way after drawing his gun. The out-of-control car barrels into one patrol car, sideswipes a second police car, narrowly missed the disabled car and everyone on the roadside, veers into traffic and then swerves back onto the side of the road. Sparks fly as the car grinds to a stop.

The driver of the speeding car, 26-year-old Cedric Keith Henson Jr., was detained at the scene and cited for driving while intoxicated. Police rushed to remove him from the car as soon as it stopped.

One patrol car was heavily damaged in the crash; miraculously, no one was hurt and no other motorists were injured.

Police are using the footage to remind people about the dangers of drunk and impaired driving, according to WILX.

It’s a massive national problem: Someone dies in one of these crashes, on average, once every 51 minutes, according to the Centers for Disease Control and Prevention (CDC). Alcohol-impaired driving deaths alone account for nearly a third of all driving deaths nationwide, and kill over 10,000 people every year.