Insane police chase literally crashes to a dramatic end, and the whole thing was caught on video 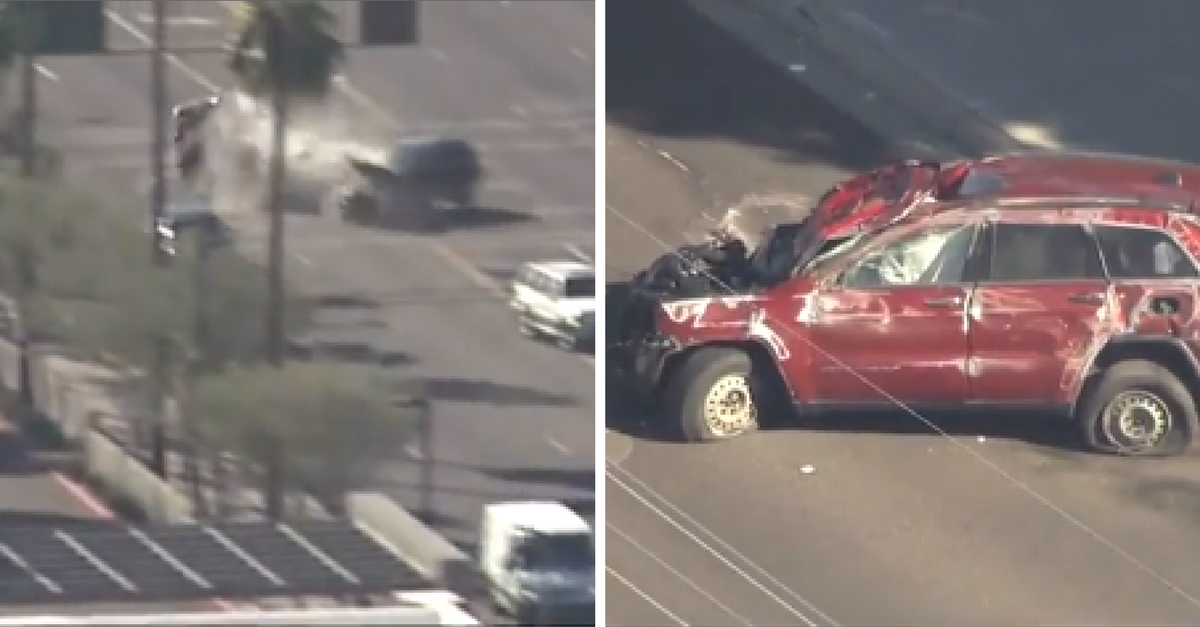 A dramatic police chase on Wednesday morning began in Phoenix, Arizona and came quite literally crashing to a violent end with a head-on collision in Tempe — and it was all caught on camera.

The suspect, a man driving a red Jeep, took police officers on the wild pursuit when he evaded law enforcement during an attempted traffic stop in downtown Phoenix. Officials in contact with the suspect during the chase indicated that he claimed to be a “sovereign citizen” not bound by government laws.

While troopers considered using stop sticks at several points during the chase, they determined the amount of traffic on the freeway made it unsafe to do so. Instead, they continued swerving around other vehicles in pursuit of the suspect, who eventually exited the highway and headed towards Arizona State University.

RELATED: A 911 call from a Greyhound bus led to a 2-state speeding chase – this bus wasn’t stopping

“As that vehicle approached one of the stoplights it was held up in traffic,” DPS Trooper Kameron Lee recalled. “At that point, two of our unmarked vehicles tried to box in the SUV to get it to stop and take the suspect into custody. But the suspect veered to the right and rammed one of our patrol cars and then continued southbound at a high rate of speed.”

The chase then continued briefly before the suspect slammed head-on into another car, causing a major collision that witnesses couldn’t miss.

“You had to hear it; it was loud!” one witness said. “It sounded like a big, almost like a generator exploding or something. It was a sonic boom.”

“I’ve never seen anything like that before. The car is totaled. I don’t know how she’s OK. I saw her get on the stretcher and she seemed to be talking to officers. Thank God she’s OK,” another added in regard to the other driver involved in the accident. “I have no words. That someone would do that is ridiculous.”

RELATED: After leading cops on a long car chase, this couple had one last goodbye before being arrested

Shockingly, the crash didn’t stop the suspect from attempting to flee, as he got out of his vehicle and took off running. Police, however, caught him on foot and took him into custody. He was later identified as Mitchell Taebel, 31, who has an extensive criminal history. The other driver, a 47-year-old woman, was taken to a nearby hospital with a broken hand and foot.