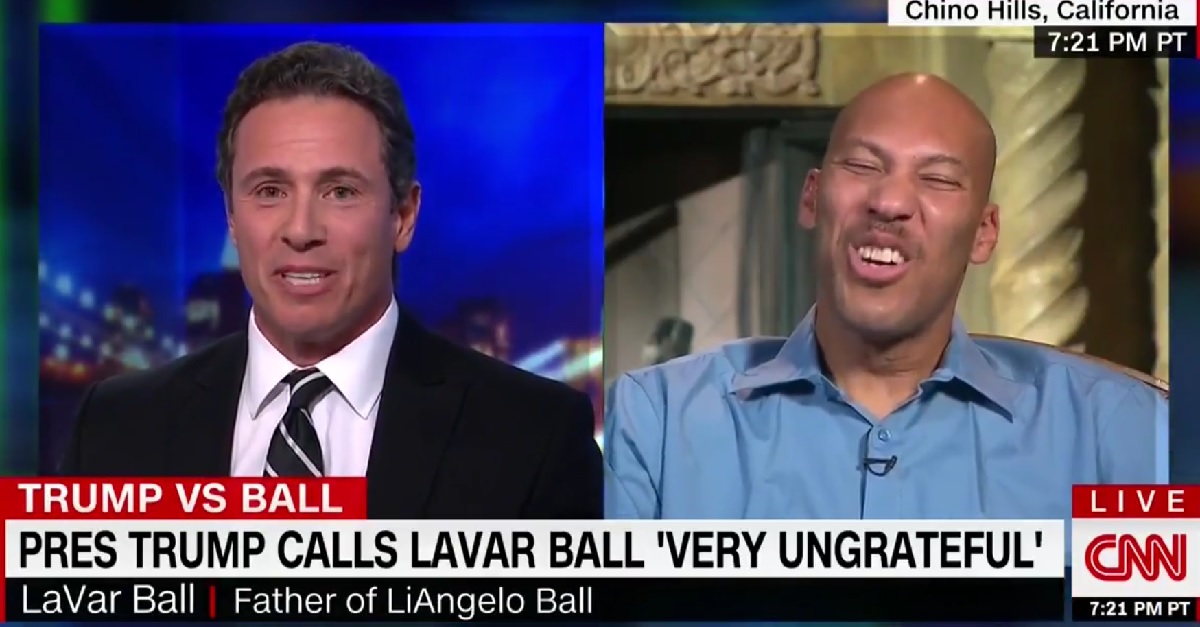 In a hectic and heated 20 minute interview, LaVar Ball told CNN host Chris Cuomo he wouldn’t thank President Donald Trump for helping to bring back his son from China, ultimately coercing Cuomo into thanking him for appearing on CNN instead.

Minutes before thanking Chinese President Xi for his role in freeing his son, Ball says he “doesn’t go around saying thank you,” contesting President Donald Trump’s role in freeing son LiAngelo Ball and other UCLA basketball players arrested for shoplifting in China, where UCLA was playing an exhibition game against Georgia Tech.

President Donald Trump has called Ball “very ungrateful” for refusing to thank him for his role in freeing LiAngelo, and even said he should have “left him in jail.”

Shoplifting is a very big deal in China, as it should be (5-10 years in jail), but not to father LaVar. Should have gotten his son out during my next trip to China instead. China told them why they were released. Very ungrateful!

In one of the less contentious exchanges, Ball downplayed the seriousness of his son’s shoplifting charge, even though it could have earned prison time for his son in China.

“It wasn’t a big deal because being raised in South Central LA, I’ve seen harsher things — I’ve seen 16 and 17-year-old kids have to go to jail for life that were my friends, doing bad things, making bad decisions, I mean doing stuff that’s harming people,” he said. “The way I looked at it was, okay, he shoplifted, he wasn’t physical, we returned it, he fessed up to it… It was an impulse thing, a bad decision at a bad time. That’s all it was, for an 18-year-old who’s never done anything wrong, never been late to class, a 4.0 student.”

He added that the crime was “victimless” and “not going without punishment.”

As the interview went on, and the more Cuomo pressed Ball to thank Trump on air, the more Ball resisted, leading to some contentious and bizarre exchanges between the two.

“Were you there?” asked Ball about China.

“I was not there,” said Cuomo.

“I can’t hear you. Okay then. Unless you were there, then you can talk to me,” shot back Ball. “I was there! I was there in China. I know you weren’t there though.”

He ultimately said “there’s a lot of other matters to go around for the president to deal with,” asking Trump to “let me deal with my son.”

“Let’s stay in our lane,” he concluded.

The full interview, in three parts, is here: