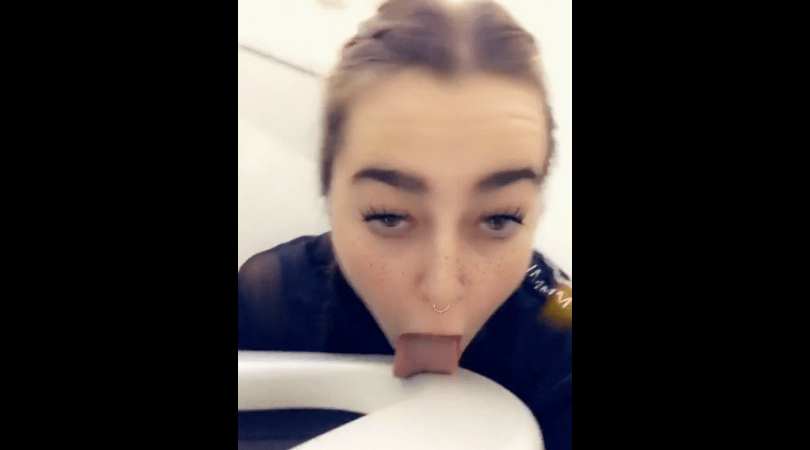 Have you ever wondered what it takes to be a savvy social media influencer? Does it require some sort of inherent understanding of people? A willingness to be different? Nah. Filming yourself licking a toilet seat will do just fine. Though instinctually knowing that French kissing a buffet of ass cheek resin, pubes, and pee droplets will play well on Twitter probably does prove that you know people and are willing to be different.

This person definitely knew what they were doing when they licked an airplane toilet seat. The video went viral and had over 4 million views and counting, before it was taken down. They had even posted a now deleted tweet basically saying, “Hi entire world, I’m glad you liked the video of me going down on a toilet. I will get to your business inquiries soon.”

Anyway, here’s the video in question. Warning, it involves exactly what has already been described.

All things considered, an airplane toilet seat isn’t even close to the grossest toilet seat you could slurp up.

They didn’t lick the lone sit-down toilet in a New York bar men’s room while it was covered in piss, with no less than four different drunk men’s stools rotting in the bowl below. People don’t like using the bathroom on an airplane, for one. So daily traffic is minimal. Second, it’s likely that the airplane bathroom gets cleaned more than once a day. Thoroughly? Maybe not. It probably just gets a broad spraying with chemicals strong enough to kill a small dog. Whatever cleaner she inhaled while tossing that 747’s salad was probably worse for her than any germs she might’ve ingested.

Though absolutely gross in the grand scheme of things, this toilet licking was downright hygienic compared to other potential public toilet tongue punches. Either way, it’s good content. They even did it with a filter on. They know what they’re doing. And crazily enough, she wasn’t the last one to do it either.

In the heat of trying to get the coronavirus pandemic under control, what’s a real social issue if idiots didn’t turn it into a way to become more famous? Calling it the “coronavirus challenge,” Tiktok user and Instagram model Ava Louise filmed a Tiktok video of herself also licking an airplane toilet seat. The Tiktok star didn’t exactly go in like this first chick did, but nonetheless, she still challenged social distancing by putting the worst kind of germs on her own tongue and sticking up peace signs after as if she just did something revelational.

You got to give these people credit. No matter what stupid trending Tiktok challenge is getting criticized, these kids are still getting the celeb attention and retweets that they want. I mean, it’s basically the handbook to become a Tiktok influencer at this point. But honestly, someone call Dr. Phil for the next generation. I don’t care if you’re a dumb 16-year-old. No one should be licking any sort of toilet seats.

Watch: The ?Draw on my Back? Challenge is The New Version of Telephone