In yet another crazy, viral Twitter video making the rounds, a New York man just jumped from a 3rd story bridge to evade the cops. He leaped over what appears to be about a 20-ft gap from the bridge onto the 2nd story roof of a building across an alley. It appears to be somewhere in Brooklyn.

In the video, bystanders wave their arms and scream, “Don’t do it! Don’t do it!” as the man is edging across the top of an abutment, getting ready to make his move. He’s looking around all sketchily and then finally makes the gigantic leap. Amazingly, he does this without a running start.

The video, posted by @nuffsaidny, was captioned, “On today’s episode of “NYC is Not A Real Place”. It’s already received over 2.8 million views.

Cops are standing on the ground next to all the bystanders and next thing you know, whoever is filming is documenting a cop hopping a chain link fence. The cops split up in different directions.

“I would have done that sh*t,” says the videographer.

In a follow-up Tweet, @nuffsaidny says, “Update: He didn’t get away.”

We see the jumper get rolled out on a stretcher with a cast around his ankle as he’s loaded into an ambulance. He’s sitting up and conscious though, talking to someone who might be his girlfriend. It’s hard to make out exactly what he’s saying, but he’s giving “Baby” directions to get something.

Needless to say, this guy’s resilient. Hopefully he doesn’t get in too much trouble for evading the cops. Also, maybe they’ll have basketball hoops in the slammer? 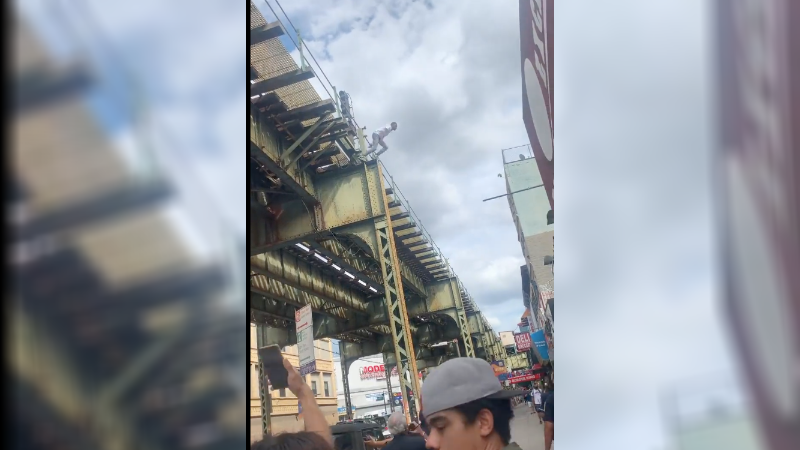