Watch This Guy Eat it HARD on Some Black Ice 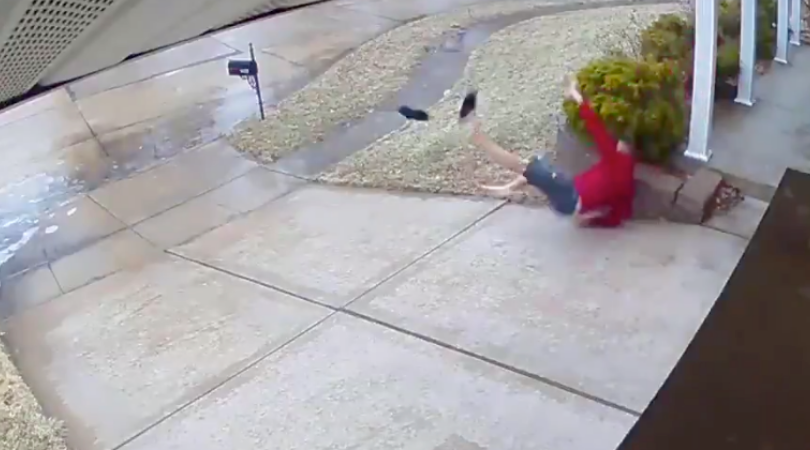 I am still a mildly spry and not totally useless 32-year-old. I am young… ish. So ice doesn’t scare me all that much. Yet. But I know it’s coming for me. Coming for my life. One day, should I make it to old age, walking across ice is going to be the equivalent of walking through a minefield full of cobras and brown recluse spiders. It will be sure death laid before me. Icy stairs may as well be a firing squad for old me.

But for now I am young and live in Texas so I give no thought to ice, my likely future killer. So with that in mind let’s all laugh at this video of some guy eating it hard on his driveway this morning. So hard that his shoes fly off.

THIS IS WINTER! Freezing rain is the real deal. This is out of St. Louis. (He's okay – and managed to hold his cup the whole time!) pic.twitter.com/hxcntuV7Di

Poor bastard never stood a chance. You can’t even see the ice. It’s as invisible as it could possibly be. This was a cartoon fall. The kind where a character walks over a hole and hovers there for a second before plummeting into the abyss. I bet that’s what it felt like. Everything probably just froze for a second as his foot left the ground. Then, thwap. He ate it.

This ice was so slippery that the force from his fall (which was hard but not that considerable) propelled him all the way down the driveway on his ass. Did someone hose down his driveway last night?

If you turn the sound on you’ll hear the wife, after her husband fell, say, “Don’t doooo that,” re: falling on the icy driveway, to which the husband responds, in perfect husband form, “I didn’t f*ckin’ do it on purpose.”

Also incredible is that the guy managed to hang onto his cup the entire time. He’s not going to need that coffee anymore. The laws of physics suddenly changing in your immediate vicinity will usually wake you up pretty good. “Oh God is the earth shifting IS MY SOUL LEAVING MY BODY oh no it’s just ice. Ow.”

Watch: Frozen, Flavored, On the Rocks: 10 of the Best Margaritas in Texas