Matador Suffers Gruesome Butt Wound After Being Gored by Bull 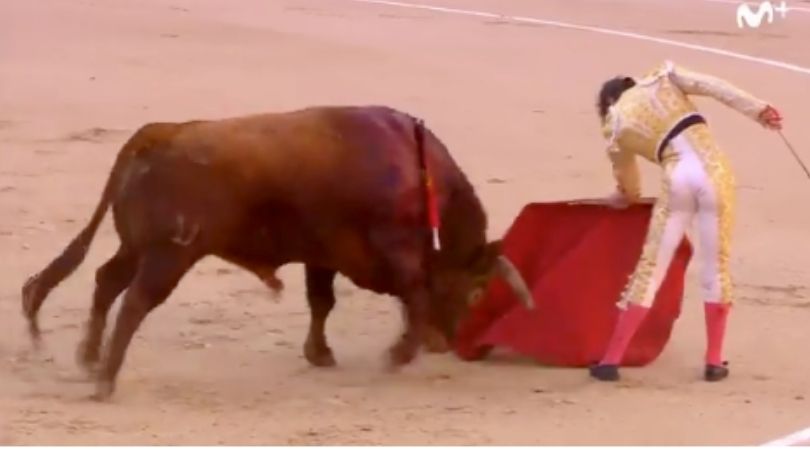 A French matador, who should have definitely gone to the hospital sooner, was left with a 10-inch wound after a raging fighting bull charged at him, goring him right up his butt. Yes, this poor man didn’t even see it coming, suffering a puncture wound to his back. The 26-year-old was performing at Las Ventas Bullring in Madrid as part of the San Isidro bullfighting Festival, but the bull clearly had a different idea, marking his territory.

The gruesome video shows French Matador Juan Leal taunting the poor bull with a red cape, when the animal suddenly turns around and wedges its horn up the matador’s backside, throwing him a foot up into the air. As expected, several audience members gasped at the incident, since you can clearly see the horn literally entering this poor man’s buttock, followed by blood all over his WHITE pants.

Leal is then seen rolling on the ground, ultimately trying to get up as fast as he can to avoid another puncture wound. Two men rushed into the ring to distract the bull, as Leal tries to compose himself, walking away clearly in pain. Shockingly enough, he manages to carry out his performance after the incident, but you can clearly see the man is in pain due to his facial expressions.

After the fight, the matador was taken to the infirmary but was later rushed to the hospital where he was operated on. Leal suffered a 25cm wound in his rectum, with a fracture of the sacrum coccyx and an exit hole in his gluteal region. Medical staff stated they were surprised this man was able to continue his fighting, let alone get up from the ground, since a “normal person” wouldn’t have been able to walk due to how deep the puncture wound was. The bull horn hit his sacrum and then slid upwards, rather than penetrating his stomach, which would have caused severe damage. Amazingly enough, he is said to make a full recovery but will need to rest to avoid any infections.

Honestly, this man is very very lucky. I really can’t believe bullfighting is still popular, let alone legal. People talk so much about animal rights and cruelty, but have bullfights like these all over the world? These men are literally taunting and injuring the animals for pure joy and cheers. I’ll never understand why people feel the need to tease innocent animals, then proceed to get close to them and their giant horns. It’s just an accident waiting to happen…like this one.

I get it’s his ‘job’ to continue and finish out the fight, but no, man. Just give up. You basically have a hole in your butt and you can see this animal is terrified. Now is your time to attack, PETA.

Next: The Cost of a Rattlesnake Bite in U.S. Will Blow Your Mind