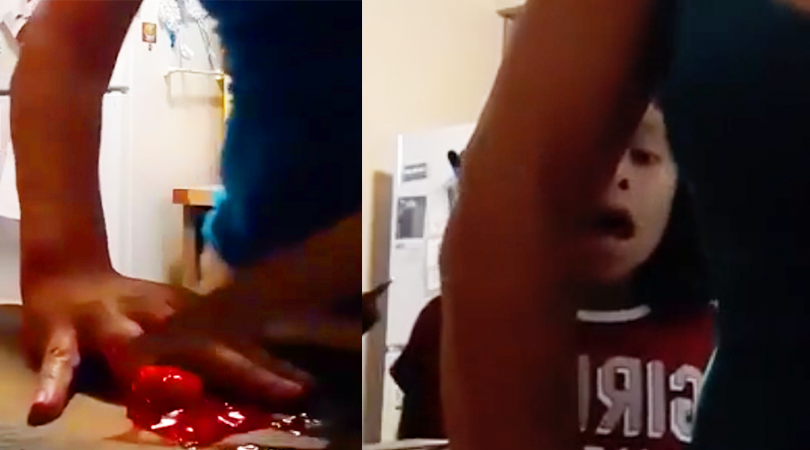 Here’s a little early Halloween fun. Melinda Thomas of Arlington, Texas decided, for whatever reason, to scare the living hell out of her kids and film it, for the lolz. Understandable. As (hopefully) a future parent I for one cannot wait to torment my dumb kids with my hilarious, clever, and terrifying pranks that their impressionable minds will never see coming.

What really made Thomas’s prank sing was the simplicity of it all. She used a baby carrot as a double for her severed finger and copious amounts of fake blood to finish off the prank. (Was it more than she needed? It appears that way but the real answer is, “You can never have enough fake blood.”)

Thomas was in the kitchen chopping vegetables for dinner when she set up the prank and then called out, “Ow I cut my finger.” Her sweet, attentive first victim/daughter immediately came running in to check on her beloved mother. What she was greeted with was an absolute blood bath. A murder scene. Gore the likes of with her sweet, young eyes had probably never even seen on a TV let alone in real life. So, naturally, the little girl immediately freaked out, screamed in terror, and ran from the kitchen as fast as she could.

The daughter’s screams were, of course, completely convincing because for all she knew her mom had just violently lost a digit. Thomas then called out to her husband, Tino, again saying that she cut her finger. Her husband ran in and between the screams of his daughter and the scene in front of him he immediately believed that his wife had lost a finger.

Boom. Prank complete. And all on video.

That poor, trusting daughter. This is only going to become a more prevalent thing now that we live in the age of smartphones and Millennials become parents. I love it.

Watch: This 4th of July Fireworks Prank Had its Victim Hilariously Terrified