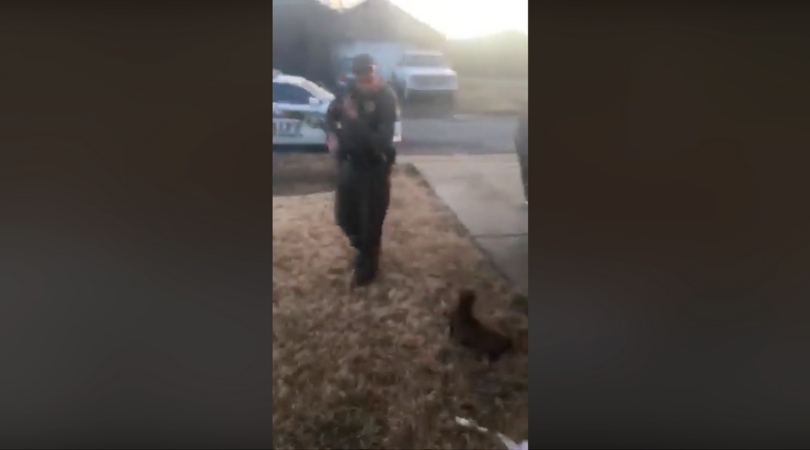 An Arkansas police officer, who is also a K9 handler, has been fired for shooting a Chihuahua after the owner refused to speak with him and follow his orders. Former Deputy Keenan Wallace was responding to a call on Friday, January 4, 2018, when he shot the small dog in the head.

The owner captured the incident and posted a graphic video on social media that has gained attention from several users worldwide. In the video, one can hear the officer asking the man to ?step to the road” while two unleashed dogs are barking and running in the yard surrounding the officers. When the man declines to step outside, the officer grabs his gun, points at the dog, and shoots at it. The dog is then heard shrieking in pain and begins to roll around on the grass as the owner yells at the officer.

The chihuahua, who goes by the name Reeses, suffered a broken jaw and shattered bones. Reese’s is expected to recover, but will most likely suffer long-term effects from the shot. Doug Canady, who rescued the dog, shared a video of the pup with a banded neck, saying she will need additional surgery but is doing well ?considering all things.?

Deputy Wallace was called to the scene for an earlier dispute between Canady and a woman who allegedly pointed a gun at the small dog at his house. Sheriff Tim Ryals said he believed there were numerous opportunities to avoid hurting the dog, saying, “I was notified Friday of an incident involving Deputy Keenan Wallace. Deputy Wallace fired his service weapon that injured an animal while in close proximity to a citizen. I believe there were numerous opportunities to de-escalate the incident.”

The department is saddened about the incident and apologized for the disappointment and distress the incident caused those who were affected by the event. Prosecutors are reviewing the footage to determine whether or not charges will be filed. The owner has created a GoFundMe page to cover the dog?s veterinarian bills and has managed to raise over $14,000 so far, surpassing its goal.

This article was originally published on January 7, 2019.