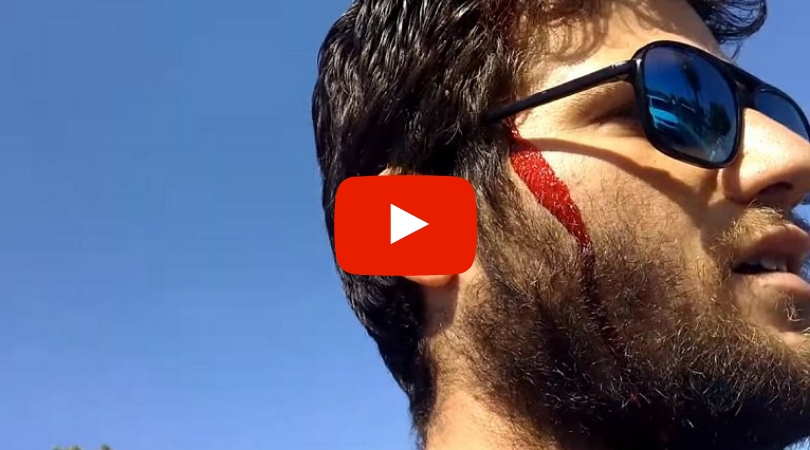 Alright, I get that as Americans we are all allowed to say what we want. You’re allowed to express your opinion in public regardless of how popular, sane or offensive they may be. BUT, that being said, people are also allowed to respond to your opinion with their own personal thoughts. That’s called freedom of speech.

Now, I know that assault is frowned upon and you basically run the heavy risk of being charged with a crime if you decided to express your opinion using violence; but I think that most people will agree with me when I say that if you hold up a sign that says “you deserve to be raped,” you’re basically asking to be smacked it the head.

Which is exactly what Street preacher Brother Dean Saxton deserved if you ask me. Basically, Saxton decided to create some controversy outside of Apollo High School, using a megaphone to tell students that they were ruining Christian faith and they were all going to go to hell because of it. He begins to harras people about homosexuality, arguing that they were straying away from his own faith and begins to quote the bible.

So, as expected, people were not having him or his idiotic sign, because that is just wrong. How are you going to hold up a sign saying that people actually deserve rape? Who are you?

There are many men who like to be beaten up. So much mixed messages. How could she know that he didn’t want it?

The video was posted on YouTube where you can clearly hear the man getting hit with a metal baseball bat from behind, but unfortunately, the assault itself wasn’t caught on film. Shocked at the whole incident, you can then see the street preacher walking away, bleeding from one side of his head.

As expected, he later pressed charges against 19-year-old Tabitha Brubaker, who is now facing charges of aggravated assault. But no worries, several people defended her action and supporters actually decided to raise money for Brubaker’s bond so she’s can remain out of jail while awaiting trial. Lawyers have also offered to represent her for free. Because well, we all know that Tabitha was in the right here.

Did he even fight back? Must not have because if it was a ‘LEGITIMATE’ clubbing, he wouldn’t have bled..men’s bodies have a way of shutting that whole process down..

The whole thing blew up on social media, and several girls showed support through hilarious tweets for Brubaker. As for the Arizona Preacher, well he’s still hanging around schools and universities basically telling children that Muslims are terrorists, homosexuals are sinners, and students wearing yoga pants and cropped tops basically deserve rape.

I’m just gonna go ahead and say it. I bet it’s only a matter of time until someone else hits him with another bat again.

This article was originally published on July 16, 2019.