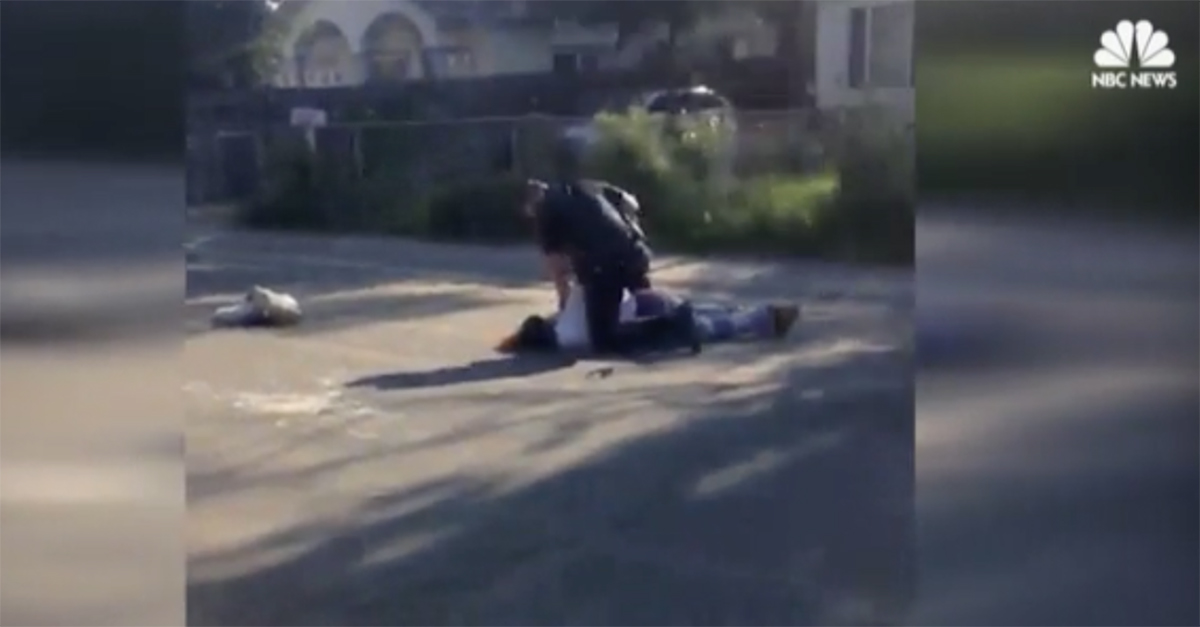 A disturbing incident caught on video involving a Sacramento police officer slamming an African-American man to the ground and punching him will be formally investigated, the Sacramento Police Department announced Wednesday.

The incident supposedly all started because the man was jaywalking.

The video, which has sparked outrage nationwide, shows the officer confronting the man in the middle of the street as he crossed an intersection. The officer starts to talk to the man, identified as Nandi Cain Jr., but things spin out of control quickly as the officer is seen taking down the man.

The officer, who has not been identified, is then seen punching Cain before a second officer arrives to help put Cain, laying on his stomach, in handcuffs. Then additional officers arrived.

RELATED: This Judge has right idea for dealing with police misconduct

Witness Naomi Montaie took and posted the video on Facebook. She can be heard continuously screaming, “Oh my God! Why’d you take him down like that? No! That was wrong!”

The video does not capture the events leading up to the officer confronting Cain in the street. However, a dashcam video shows the officer approaching Cain and the dialogue between the two before the officer slammed Cain to the ground.

Cain explained his side of the story to KCRA.

He said he thought he was going to be shot.

RELATED: Poll of police officers shows we have a long way to go on criminal justice reform

“I thought I was going to be like the next Trayvon Martin,” Cain said. “I felt like they were going to draw a gun out and shoot me in my back or try to break my arms off or something.”

“It was supposedly for jaywalking,” Cain said of the initial arrest. “And then, when they put me in handcuffs and they were driving off, I heard them [talk] about they were going to get me for resisting arrest. But as you can see on the video clearly, I didn’t resist at all.”

The Sacramento Police Department said in a statement that the officer “attempted to detain a pedestrian for allegedly unlawfully crossing the street.” Cain then “questioned the officer’s validity to stop him at which time a violent encounter occurred between the officer and the pedestrian.”

The statement continued: “For an unknown reason, the officer threw the pedestrian to the ground and began striking him in the face with his hand multiple times. The videos of this incident portray actions and behavior that we would consider unacceptable conduct by a Sacramento Police Officer.”