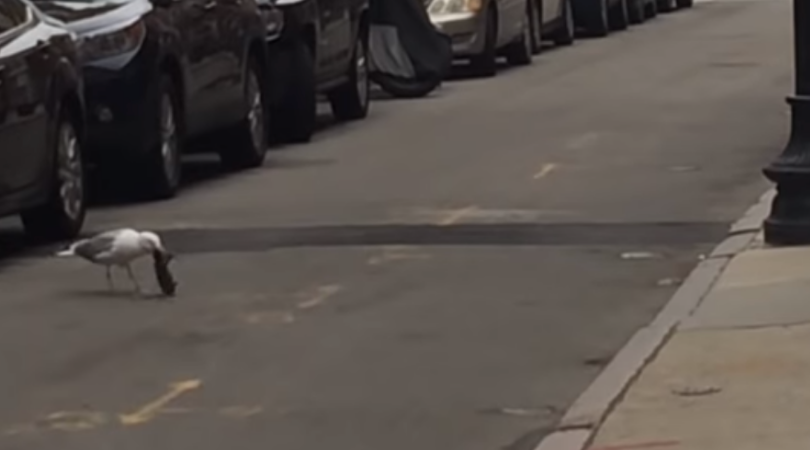 Jesus Christ, nature. From the people who brought you Pizza Rat comes “Rat Seagull”! I don’t know whether to puke or cry watching this video. Both are appropriate. Watching one of the filthiest animals on the planet swallow whole the dead body of one of the other filthiest animals on the planet is just… foul. It’s like watching the contents of a tipped over, spilling music festival porta potty wash over a pile of used tampons. It’s unpleasant.

So as two of nature’s most disgusting creations interacted in one of the grossest ways possible a couple of Brits (I think) on vacation in Boston caught it all on video. A trash bird eating a trash rodent. There’s no way they were able to eat for hours after watching this.

Again, this is so Goddamn gross. The rat’s tail is sticking out of the seagull’s mouth the entire time. That thing crawled out of some shit covered sewer pipe, ran into the straight, got run over by a car and probably had some of its insides spilling out of its mouth and ass, and then this flying beach rat plopped down and swallowed it whole.

Watching the seagull try to fly after ingesting a diseased corpse that is probably half its body weight is also gross. You just sit there waiting for it to barf up the dead rat. There should be city sanitation workers roaming Boston, New York, etc. with flamethrowers, ready to purge shit like this from existence when it happens. There is more disease in and on that bird than a twenty-foot high pile of bubonic plague-ridden human corpses.

I might skip my next meal because I watched this video. All I can think of is a dead rat slowly digesting in a seagull’s stomach.

Pray that the movie Birds never happens in real life. The birds would win. They have seagulls on their side.

This article was originally published on March 1, 2019.

Watch: Watch this rat go the extra mile and get a slice of pizza as a reward